The victim, identified as S. Parthiban, was reported missing at 11.24pm on Sunday (March 21) by his family after he did not return home.

Tebrau Fire and Rescue station chief Shamsul Khomari Bakar said the victim went out from his house at about 10am and met two of his friends under a bridge near the river.

“Not long after, his two friends decided to go home while the victim went for a swim. He was also seen by a few people who were fishing under the bridge at the time.

“But the victim never returned home, and his family then decided to look for him and asked around until they met a fisherman, who last saw the victim at the bridge, ” he said in a statement here on Monday (March 22).

He added the family lodged a report at the Bandar Dato’ Onn police station, and the Fire and Rescue Department deployed 12 personnel from Tebrau and Skudai to the location.

Shamsul said the department found the victim’s t-shirt, sandals, and motorcycle near the river before conducting a search and rescue operation in the four-meter deep river.

He added the victim’s body was found at 2.49am on Monday, about 20m from where he was last seen.

Shamsul said the body was handed over to the police and sent to the Sultan Ismail Hospital for a post mortem.

In an unrelated case, a 16-year-old died after falling from his motorcycle and was run over by another motorcyclist at Jalan Kangkar Tebrau here.

ACP Mohd Padzli said the incident occurred at about 10.35am on Monday where the victim lost control of his motorcycle upon arriving at the location.

“Another motorcycle coming from the opposite direction failed to avoid the victim, ” he said, adding that the victim suffered serious head injury and was pronounced dead at the scene.

He said the case was being investigated under Section 41(1) of the Road Transport Act 1987 for reckless driving. 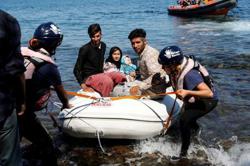