PETALING JAYA: He’s the man who is at the centre of a row between two countries, yet so little is known about him.

The North Korean businessman Mun Chol-myong (pic) is the reason Malaysian and international press have been camping outside the North Korean embassy in Bukit Damansara here since 7.30am yesterday, almost like the days when Kim Jong-nam was murdered at klia2 about four years ago.

According to Bernama, some medical personnel from a private hospital were seen yesterday morning entering the premises in a van, probably to conduct swab tests on those who will be returning to Pyongyang.

But who is Mun, who was deported to the United States from Malaysia on Wednesday, which led to the Hermit Kingdom severing diplomatic ties with Malaysia.

He is said to have lived in Malaysia for about 10 years until his arrest on May 14,2019, on allegations of money laundering.

Believed to be in his mid-50s, Mun reportedly lived in Malaysia with his wife and two children. He moved here from Singapore in 2008.

Apparently, he had lived in an apartment in a suburb of Kuala Lumpur.

His detention on May 14,2019, was based on a provisional arrest warrant issued under the Extradition Act.

US authorities had requested for his extradition.

He first appeared before the Kuala Lumpur Sessions Court on Dec 13,2019.

His application for a writ of habeas corpus at the Kuala Lumpur High Court on Dec 29,2019, and his appeal at the Federal Court on Oct 8,2020, were dismissed, as the courts found that his application and appeal were unjustified and failed to meet the requirements under the Extradition Act.

About two weeks ago, he lost a final appeal at the Federal Court.

He was then extradited to the United States.

But Pyongyang was deeply unhappy with the extradition and thus announced that it was severing diplomatic relations with Malaysia.

Malaysia, on its part, denounced North Korea’s decision and ordered all diplomatic staff and their dependents at North Korea’s embassy in Kuala Lumpur to leave the country by yesterday.

It is believed that there are 33 North Koreans, including diplomatic employees’ family members, at the embassy.

This is not the first time ties between the two countries have soured in recent years, with a diplomatic row sparking after North Korean leader Kim Jong-un’s estranged brother, Jong-nam, was assassinated in Sepang in February 2017.

According to a news report in 2019, Mun had denied claims by the FBI that he was the “leader of an international organised criminal group involved in laundering proceeds of bank fraud”.

The FBI was said to have claimed that Mun laundered funds through front companies and facilitated shipments of prohibited luxury goods from Singapore on behalf of the North Korean regime, violating both United Nations and American sanctions.

He faces four charges of money laundering and two charges of conspiracy to launder money in the United States. 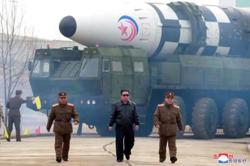