The suspects are believed to have been involved in a syndicate providing protection to lorry drivers who commited traffic offences, particularly for overloading.

The arrests were made in Kedah involving eight JPJ officers, one traffic police personnel and a former traffic policeman and a civilian.

In Penang, nine JPJ officers were arrested while in Perak, graft busters arrested eight JPJ personnel and a member of the public.

An individual was arrested in Perlis and another seven JPJ officers and four civilians were arrested in Melaka.

The arrests were made since Monday (March 15).

According to sources, the modus operandi for the syndicate is that action will not be taken against lorry operators that had committed traffic offences.

"To ensure that action is not taken, the operators will bank in a certain amount to the officers' bank accounts or that of their proxy.

"They are believed to have received between RM150 and RM3,000 a month. It is estimated that members of the syndicate had collected around RM1.64mil over time," said a source.

He said the operation was a collaborative effort between the MACC and JPJ in an effort to boost the department's integrity. 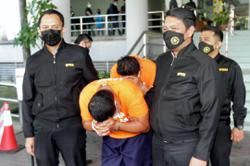