ALOR SETAR: Two hawkers who are believed to have shot and killed a stray dog with arrows have been remanded for three days.

The char keow teow and yong tau foo sellers were brought by police to the Alor Setar Court at 10.50am Monday (March 15).

A viral video of a helpless stray dog shot by an arrow sparked public outcry, with police saying investigations are underway.

The video was from a CCTV recording of the incident on Thursday (March 11), between 4.21am and 5.26am, in Lorong 3, off Jalan Putra here.

Kota Setar OCPD Asst Comm Ahmad Shukri Mat Akhir said the two suspects, in their 20s and 30s, respectively, were arrested separately at 4.00pm and 5.00pm at a house at Darulaman Height in Jitra and by the roadside of Jalan Kg Hilir Kepala Batas here.

It is understood that the younger suspect is the nephew of the older man.

"Police seized two bows and 21 arrows from the house of the older suspect," he said.

He added the case was being investigated by the state Veterinary Services Department under the Animal Welfare Act 2015. 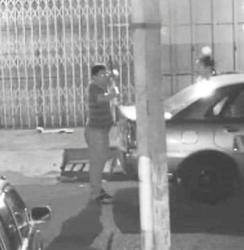