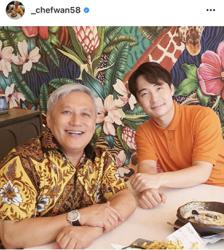 PETALING JAYA: Having roasted Western celebrity chefs over how they cooked fried rice, Uncle Roger found himself on the receiving end of some schooling by fellow Malaysian Datuk Redzuawan Ismail, better known as Chef Wan.

Uncle Roger, the alter ego of London-based Malaysian standup Nigel Ng, was put on the spot when he was challenged to prepare Lamb Shank Kerutup at Chef Wan’s restaurant in Kuala Lumpur.

Speaking in “manglish” as befitting Uncle Roger’s persona, the duo served up a “comic sensation” in a video posted on Ng’s Facebook page yesterday.

Although Ng started off on good footing by identifying aromatics like pandan, cinnamon and star anise, he could not identify cardamon and cloves, prompting Chef Wan to retort:

“Your hand must be very fast, just like your mouth.”

When the comedian mistook galangal for ginger, the chef needled him: “Galangal and ginger, you don’t know? How you want to be a chef?”

In his defence, Ng, who has a podcast on Asian culture called Rice to Meet You, said he was not trying to be a chef but just a comedian before failing to identify lemongrass.

“Everything smell like ginger to Uncle Roger, ” quipped Ng, whose scathing review of the egg fried rice video by BBC Food presenter Hersha Patel first earned him millions of views and fans on social media.

In the video entitled Uncle Roger Disgusted By This Egg Fried Rice, Ng expressed mock horror as Patel drained the cooked rice with a colander and then rinsed this with running tap water, using his famous “Haiyaa!” (to express disappointment).

When Ng asked why there were so many steps to cooking the dish as there were “only three steps” to egg fried rice, Chef Wan said: “Hurry up, because when you are talking, see all burning. Mind here, okay.”

Declaring that a great chef “does not measure the ingredients but just throws these into the cooking”, Chef Wan said: “We boil all our lamb and you just throw inside, like that. See that, very easy.”

Asked where his MSG (monosodium glutamate) – Uncle Roger’s confessedly “favourite ingredient” – was, Chef Wan said that was not Chinese cooking.

“See, it is more difficult to do Malay food than your fried rice, “ he said, warning Ng not to get his sweat into the food.

During the tasting session, which came after three hours of cooking, Ng managed to get a dig at Chef Wan, remarking: “This is the only good thing you have in your restaurant.”

Asked by Chef Wan why there were daily queues then at his restaurant, he said: “Uncle Roger come here, I just walk in. No queue at all.”