“The reading from the water samples taken from the river show that it is still normal and not at a dangerous level, ” he said when met after carrying out an inspection here yesterday.

Based on investigations by the Johor Department of Environment (DOE), he said the pollution this time around was due to waste water from nearby premises.

“The pollution did not come from scheduled waste as what had happened some two years ago, ” he said, adding that the state DOE would continue to monitor the river.

Tuan Ibrahim said state DOE officers went to the scene along Sungai Kim Kim near Kampung Bukit Pulai at 10.30am on Monday.

“When the team arrived at the scene, the black patches that were reported were no longer visible and no smell was detected.

“We also carried out drone flights around the area, which sighted the black patches, while DOE enforcement teams went along the river to see any possible causes of the pollution, ” he added.

He denied a report by a Malay daily which claimed that Sungai Kim Kim had been polluted with toxic waste.

Tuan Ibrahim also said the ministry together with the state government, Universiti Teknologi Malaysia as well as the private sector were currently building a river trail along Sungai Kim Kim.

The river trail would help encourage members of the local community as well as surrounding industries to be more responsible in taking care of the river.

On March 7,2019, several students and teachers experienced nausea, dizziness and vomiting after they were believed to have inhaled toxic fumes caused by chemicals dumped into Sungai Kim Kim.The pollution resulted in the temporary closure of 111 schools in Pasir Gudang, affecting several industries and the lives of the local community for about two weeks. 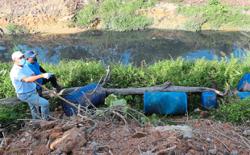