IPOH: Police have arrested a man and seized 26 small packets of various drugs in Sungkai after a 22km car chase.

Muallim OCPD Supt Sulizmie Affendy Sulaiman said the 43-year-old suspect had evaded a police roadblock near the Slim River toll plaza, sparking off the chase that lasted about 30 minutes at about 10.30pm on Monday (March 8).

Supt Sulizmie said the man, a towing service runner, was stopped and arrested in front of the Sungkai police station.

“During our inspection, we found one packet of drugs, containing methamphetamine and 25 packets of heroin.

“We also found equipment believed to be used for inhaling drugs, small plastic bags, RM362, SG$19 and a mobile phone.

“The total value of the seized items and cash was about RM2,500.

“He was brought back to the Slim River police station to facilitate investigations, ” he said in a statement.

Supt Sulizmie said the man, who has a prior drug-related case, is being remanded until March 14.

“He will be investigated under Section 39B, Section 12(2) and Section 15(1)(a) of the Dangerous Drugs Act, ” he said, adding that Section 39B carries the mandatory death sentence.

“He will also be investigated under Section 186 of the Penal Code for obstructing a public servant from performing his duty, ” he added. 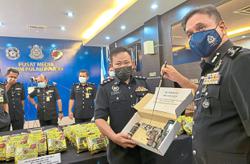 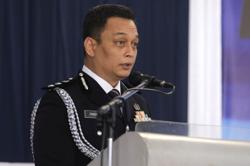