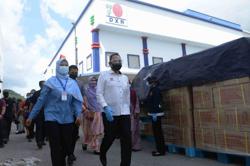 The Human Resources Minister said the ministry had set Act 446 as a precondition to bring in foreign workers into the country.

Saravanan said the entry of foreign workers would not be approved if employers could not convince the Manpower Department (JTK) on the facilities provided in accordance with the number of workers to be hired.

"Give us a couple of years, Malaysia will be one of the best countries to show the rest of the world that we know how to manage our workers and the system," he told reporters at a ceremony marking the Human Resources Ministry’s achievements in one year under the Perikatan Nasional administration.

The minister said the JKT would also come up with a special framework soon on the building of Centralised Labour Quarters (CLQ) for developers in meeting the specifications and standards, in line with the Emergency Ordinance Workers’ Minimum Standards of Housing and Amenities (Amendment) Act 2021, which took effect on Feb 26.

"This framework covers improvements in managing housing and accommodation, and providing a conducive environment to ensure that foreign workers are treated like humans, ” he added.

On the ministry’s achievements in the last year, Saravanan said 2.7 million workers could be retained as well as 300,000 employers and industries while the country and the rest of the world were facing the Covid-19 pandemic.

On 2021, he said the ministry was focusing on, among other things, increasing the capacity of the training institutes, proposed establishment of the National Human Resource Centre, and enhancing social protection and coordination of upskilling and reskilling efforts.

Meanwhile, Saravanan also said that the ministry was studying the proposed expanding of the work-from-home (WFH) concept following the implementation of the Movement Control Order (MCO).

He said the WFH concept during the implementation of the MCO 1.0 since March last year to curb the spread of Covid-19 was seen to be successful in a number of sectors.

"We are studying whether this could be practised after the MCO but only in some sectors where the performance of the employees could be assessed, ” he added.

Prime Minister Tan Sri Muhyiddin Yassin had reportedly urged the Public Service Department and Human Resource Ministry to look into expanding the WFH facility for the public and private sectors with full pay for workers caring for sick and elderly family members and in helping wives care for newborn babies.

Saravanan said the WFH concept could help reduce costs, besides creating a new work culture but its success would depend on the workers’ sincerity as there was the fear that some might take advantage of it. - Bernama 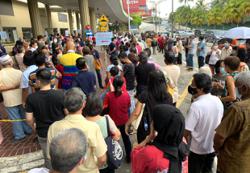