JOHOR BARU: The Malaysian Anti-Corruption Commission (MACC) has confirmed that PKR’s Sekijang MP Natrah Ismail has lodged a report over her allegations of being offered to switch sides.

In a statement, the anti-graft body said the lawmaker went to the Segamat branch office pertaining to allegations of a bribery offer of RM10mil by two individuals who wanted her to switch sides.

“During the meeting, Natrah confirmed there is no bribery offer amounting to RM10mil as alleged by a Facebook page known as Ops Johor.

“However, MACC will be carrying out an investigation on the issue and having statements of several witnesses and Natrah’s recorded,” it said Sunday (March 7).

MACC also urged the public not to make any speculation pertaining to this matter.

Earlier, Natrah lodged a report with the MACC over an attempt to get her to support Prime Minister Tan Sri Muhyiddin Yassin with promises of benefits.

Natrah claimed that the incident happened on March 3 involving two individuals including a “Datuk Seri”.

“I made the report based on Section 25 of the MACC Act 2009 over an obligation to report an act of corruption and I do hope the anti-graft body would investigate the matter immediately.

“I will like to reiterate once more that I have no interest in giving my support to Muhyiddin, as I would not betray PKR, its leaders and most importantly, the voters in Sekijang constituency,” she said in a statement here on Sunday (March 7).

She also advised certain quarters who are still trying to lure PKR lawmakers and the Opposition in general, to stop.

“Your minority government that you are trying to save is almost at its end, and to the government, I have one thing to say. Fight!” she said.

On Saturday (March 6), the MACC had urged Natrah to lodge a report following allegations that she had been enticed to switch allegiances. 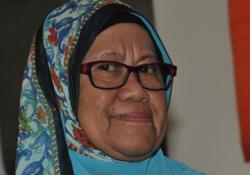