He said the amount was much higher than the estimated RM5bil.

"I am happy that we did almost 30% better than in 2019 despite the pandemic, which hit the global economy badly.

"We hope to do even better this year and are hoping to secure RM10bil," he told reporters at Wisma Negri on Friday (March 5).

Aminuddin said the state came in seventh for the amount of new investments received in 2020, and this was yet another record.

Of the RM7.9bil, RM3.8bil was in the form of foreign direct investments (FDI).

Aminuddin said the manufacturing and services sectors received the bulk of the investments.

He said apart from having good infrastructure, Negri Sembilan was a favoured destination among investors because of its proximity to the Klang Valley and the country's airports and seaports.

"My administration is also investor-friendly with approvals given promptly.

"We have also come up with policies to spur growth and more incentives to attract investors," he added. 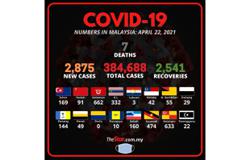