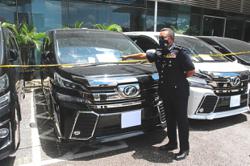 KUALA LUMPUR: A cloned car syndicate was busted by the police with the arrests of six men and the seizure of 19 vehicles worth RM3.5mil.

The six suspects are aged between 22 and 42, and were arrested in raids conducted in Kuala Lumpur, Selangor, Pahang, Johor and Penang from Feb 2 until Tuesday (March 2).

"This led to the month-long operation codenamed Ops Lejang. The suspects were arrested and the cloned vehicles were seized," he added at a press conference at the KL police headquarters on Friday (March 5).

Comm Saiful Azly said the syndicate would target cars with unpaid loans, stolen cars or cars that were brought in from Singapore.

"The syndicate would modify the chassis numbers based on cars that been declared a 'total loss' and they would obtain the information on such cars from accomplices or through the Internet, ” said Comm Saiful Azly.

He added that the original car grants would then be obtained through an inside man in an agency, and the syndicate would then sell the cars to unsuspecting customers after the forgery was completed.

"The cloned vehicles would be sold for about RM100,000. We believe the syndicate sold up to six vehicles a month if the demand was good," he added.

Comm Saiful Azly also said that a check revealed that the chassis numbers for 16 of the 19 vehicles seized had been tampered with.

"Nine of the tampered vehicles were reported stolen in Kuala Lumpur, Johor, Selangor and Perak," he said.

Asked if insurance companies or members of a government agency were involved with the syndicate, Comm Saiful Azly said it was still under investigation.