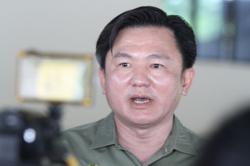 (From left): A. Sivasubramaniam and Paul Yong Choo Kiong. -filepic

Both of them had left DAP after Perikatan Nasional formed the Perak government in March last year. Three months later, Sivasubramaniam joined Gerakan while Yong remained as an independent.

When contacted, Perak Bersatu secretary Datuk Zainol Fadzi Paharudin confirmed that both of them have joined the party.

He said Bersatu had received their applications in December last year, and that both of them would be joining as associate members.