No illegal entry: Undocumented immigrants being rounded up during a raid by the immigration department in Petaling Jaya Old Town, Selangor in this file photo.

He said between May 1 last year and Feb 26 this year, the NTF seized 319 boats and 1,465 land vehicles used by smugglers in an operation codenamed Ops Benteng.

“After about a year, one of the biggest successes for the ministry, especially the military, is that we have managed to safeguard our nation’s borders and sovereignty.

Covid-19 in the country, ” he said in an interview with several media houses on the achievements of the ministry for the past year.

Ismail Sabri, who is also Senior Minister (Security), said the seized assets were worth RM307mil.

“We also expelled or ‘shooed away’ 1,276 undocumented immigrants, nine ‘tekong’ and 612 boats and vessels during the same period.

“As part of the NTF, the MAF is working closely with other agencies, especially the police, in preventing the entry of undocumented immigrants, ” he said.

“Earlier this year, we received 27 all terrain vehicles to increase mobility for our personnel involved in maintaining border security.

“Currently, we have 55 drones operational nationwide and this year we aim to increase the number of drones, ” he said.

On cyber threats, Ismail Sabri said the ministry through the MAF and the Cyber and Electromagnetic Defence Division had begun efforts to strengthen the cyber and electromagnetic domains.

“On the domestic front, we are working with various agencies, including the National Cyber Security Agency (NACSA) and the Malaysian Communication and Multimedia Commission (MCMC), on this aspect.

“We actually need more funds to increase our cyber defence capabilities, ” he added.

He said it was fortunate that the recent attacks by a hacker group called “Anonymous Malaysia” did not affect the ministry.

“Cyber defence is among the ministry’s priority and if our information is hacked, the country’s confidential information will be in jeopardy, ” he said.

The group is believed to be responsible for cyber attacks on websites belonging to the government and the private sector.

On the welfare front, Ismail Sabri said about 30,000 housing units were still needed for military personnel.

“Under Budget 2021, the government approved an allocation of RM500mil for 1,000 units under the ‘Rumah Keluarga Angkatan Tentera’ initiative.

“However, we cannot rely solely on government allocation. Thus, we are planning other efforts to build more housing units, including through private-public partnership and land-swap initiatives, ” he said.

Among the projects that started last year were 3,500 units in Sungai Besi, which cost between RM150,000 and RM250,000 per unit under the “1 personnel 1 house programme”, 223 units at Semenggo Camp in Sarawak and work to upgrade existing units from two rooms to three rooms.

“We are planning another project this year in Setapak comprising 7,374 housing units, which cost between RM150,000 and RM400,000 per unit under the ‘1 personnel 1 house’ programme also, ” said Ismail Sabri.

On the education front, he said a 30% quota was set for children of ministry and MAF personnel at Maktab Rendah Sains Mara (MRSM) Bera in Pahang while for the Royal Military College (RMC), the quota was 20%, he added.

“For Universiti Pertahanan Nasional Malaysia, we have set a 10% quota for students from RMC.

“We have also upgraded 38 schools located in MAF camps while our efforts to establish tuition classes for each camp is ongoing, ” he said.

The ministry also wants to increase its security readiness and capabilities this year through an increase in assets.

“Being at the optimum level of preparedness is our priority.

“Another long-term goal is to make Malaysia a producer of military assets, ” Ismail Sabri said, adding that local defence industry players would benefit from this move.

“It has always been my dream for Malaysia to become a producer of military assets. Other countries, including neighbouring ones, have done this as well, so it is time for us to get on board, ” he said. 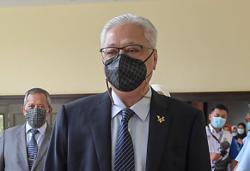