KOTA KINABALU: A plantation manager in Sandakan was held by the Malaysian Anti-Corruption Commission (MACC) on Monday (March 1) for allegedly misappropriating RM20,000 from the plantation workers' fund in 2018.

The 39-year-old man was detained at 9am at the Sandakan district MACC office.

It was learned the suspect committed the breach of trust by taking out the amount of money through six cheques of a bank.

Sabah MACC director S. Karunanithy confirmed the arrest, and said the suspect is being investigated under Section 405 of the Penal Code.

"The suspect has been released on a RM5,000 MACC bail with one surety.

"He will be charged at the Sandakan corruption special court tomorrow (March 2)," Karunanithy added. 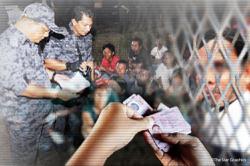