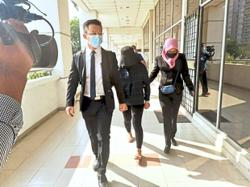 Wong Siow Yen (middle) being taken to the Sessions Court in Seremban where she was charged for the alleged crime.

SEREMBAN:A 39-year-old human resources manager claimed trial at the Sessions Court here to a charge of submitting a false claim amounting to RM6,000 for the government's wage subsidy programme.

Wong Siow Yen pleaded not guilty after the charge was read to her before judge Madihah Harullah.

She allegedly committed the offence on April 9 last year at YTG Logistic and Trading Sdn Bhd in Gemas.

The accused had allegedly submitted the names of five employees to the Social Security Organisation (Socso) although they were not entitled to the subsidy amounting to RM6,000.

Wong was charged under Section 18 of the Malaysian Anti-Corruption Commission (MACC) Act 2009, which is punishable under Section 24(2) of the same legislation.

Offenders can be jailed up to 20 years and fined not less than RM10,000 or five times the amount involved.

However, counsel for the accused Chuah Shyue Chein appealed for a minimum amount as Wong's income had been badly affected due to the Covid-19 pandemic and that she had to provide for her four young children.

Madihah then fixed bail at RM8,000 with one surety and fixed April 9 for re-mention. 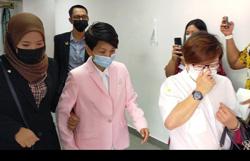