JOHOR BARU: A 37-year-old businessman was acquitted of a drug possession charge after a High Court here ruled that the prosecution had failed to prove a prima facie case against him.

P. Kiran Kumar was acquitted on Monday (March 1) after the court ruled that the prosecution had failed to provide credible evidence on the charge against him as well as contradictory statements made by the witnesses.

According to the charge sheet, Kiran was in possession of 34.9gm of methamphetamine at a supermarket in Seri Alam at about 7.10pm on July 1,2018.

The act is an offence under Section 12(2) of the Dangerous Drugs Act and punishable under Section 39A(2) of the same Act, which carries a jail term of up to five years and 10 strokes of the cane.

In her decision, Judicial Commissioner Dr Shahnaz Sulaiman said besides a no prima facie case, the two police eyewitnesses gave contradictory statements from each other.

In a separate case, a 40-year-old electrician pleaded not guilty to a charge of smuggling immigrants four years ago.

N. Kumaresan was accused of committing the crime at 6.7 nautical miles from Tanjung Gemok, Sedili, Kota Tinggi at about 2.02am on May 1,2018.

If found guilty, he faces up to 15 years’ jail, a fine or both under Section 26A of the Anti-Trafficking in Persons and Anti-Smuggling of Migrants Act (Atipsom) 2007.

Deputy Public Prosecutor Suriani Ujang asked the court to deny the accused bail because he is deemed a threat to national security, an offence listed under the Security Offences (Special Measures) Act 2012 (Sosma).

Defence counsel Foo and Veeranesh asked the court to offer bail, citing a precedent that was made at the Federal Court in Koh Chin Wah's case and Section 26A of the Atipsom Act last year.

However, the request was rejected. 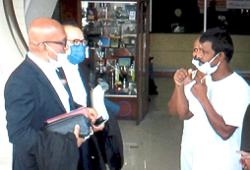