He said that he had spotted dolphins in parts of the state while doing research on frogs and mammals, adding that a partner who specialises in studying insects had also reported seeing these mammals in areas close to human activities and residential zones

Shavez said that these sightings means that there is a need to create more awareness about these marine mammals and felt that the best way to protect and conserve them was through engagement with and cooperation from local communities.

“Our engagement with these communities, making use of their local knowledge of the coast, will enable them to help us monitor the behaviour and abundance of local dolphin populations, ” Shavez said.

He said an additional benefit of dolphin watching will be that locals might be able to patrol estuaries, bays and the coast to spot any illegal fishing in their areas.

Shavez also said that they also aim to use this project to involve local people in the conservation of local species through education and job creation via conservation tourism.

He added that through conservation tourism, the knowledge of local fishermen is valued so that they can be employed to guide tourists on dolphin-spotting safaris which would offer them an additional source of income.

Shavez then said that the second component of the project is to raise awareness in coastal communities of the impact of human activities on local dolphins, for example by working with schools to develop ‘plastic bag free’ policies.

He said as with the better studied ecosystems of the rainforest, any species cannot be considered to be living in isolation as the dolphins are part of the network of plants and animals in the coastal areas and river estuaries.

“They - like animals such as the orangutans of the rainforest - may be considered as indicator species for their environment, and by studying them we hope to obtain further evidence of ecological change, ” he said.

Shavez said that the focus of the project will be on investigating populations of these species in coastal waters, estuaries and bays and added that it would consist of daylight observations and hopefully night surveys using mounted spotlights.

“The Irrawaddy dolphins and Hump-backed dolphins have already been regularly observed by members of our project team and, interestingly, sometimes dolphins have been recorded close to the shoreline and village communities, ” he said.

If successful, their Sabah survey will be expanded to other parts of the Borneo coast including Sarawak, Brunei and Indonesia and will involve working with other conservation groups such as Plant Indonesia. 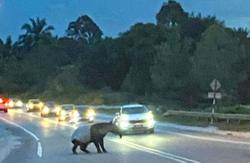