PETALING JAYA: A freelance journalist has withdrawn his allegations against the Chairman of The Star Media Group, Datuk Fu Ah Kiow (pic) and has apologised for the inconvenience caused.

When contacted, Fu says “There was a legal action which I brought against Krishnamoorthy pertaining to letters which he issued to the Securities Commission, Bursa Malaysia, Companies Commission Malaysia and Minority Shareholders Watch Group dated 1.6.2020.

“Krishnamoorthy has issued a letter to those bodies and me personally on 23.2.2021 to withdraw his allegations and has since apologised.

“I have therefore withdrawn my legal action against him as the issue has since been settled.”

A legal action was previously brought by Fu against Krishnamoorthy pertaining to letters the freelance journalist sent to these organisations. 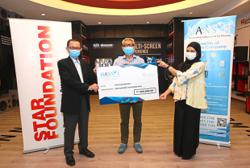