PETALING JAYA: Restaurants and eateries are now seizing the last golden opportunity in view of Chap Goh Meh this Friday to promote festive menus and dining packages to make up for loss of income over the past two weeks.

This came following the government’s recent decision to relax the standard operating procedure for dine-in according to the size of tables and the number of diners.

Due to this, the proprietors are all smiles again as many of them have received inquiries and bookings.

“We received numerous queries and bookings after the announcement.

“Now we are getting many reservations at the eleventh hour as families, especially the elderly and children, can finally come out to dine in together on one big table, ” he said.

On Feb 9, the government revised the SOP by allowing dine-in but limited to only two people to a table.

Then on Feb 19, the eighth day of the Chinese New Year celebrations, the rule was further relaxed to allow restaurants and eateries to seat their patrons according to the size of the table by maintaining physical distancing.

Sia, who is the managing director of the Loon Sing Group of Restaurants, said until the festive season ends on Feb 26, restaurants and eateries would promote various set meals with yee sang, catering for families and groups.

“Since six people can now dine together in the usual table for 10 persons, the set meals will be designed for six pax, starting from RM400 up to over RM1,000, depending on the dishes.

“Patrons can also customise the menu according to their budget and preferences, ” he said, adding that restaurants were eager to accept requests from diners in order to close more sales.

“Some have closed down while many others are merely hanging on, ” he said, adding that many owners had to resort to using their own savings to keep their business afloat and prevent from laying off long-time staff.

Malaysia Singapore Coffeeshop Proprietors’ General Association president Datuk Ho Su Mong said many of its members had come up with affordable set meals to entice patrons even before the start of the Lunar New Year.

“There are set meals designed for two pax, four pax and six pax with yee sang and festive trimmings, while giving more focus on delivery orders. It is timely to allow more than two diners to a table because we expect the people to come out and dine together this week.

“At least with the relaxed SOP, we can still manage and close some sales. Otherwise, more will have no choice but to close their business, ” he said.

Ho predicted that the slow season after Chap Goh Meh would continue until the Qing Ming Festival on April 4.

He said smaller crowds were expected to balik kampung for tomb sweeping and operators would adopt a “wait-and-see” approach before deciding on the next step. 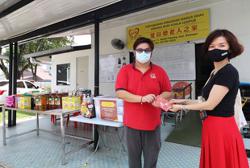