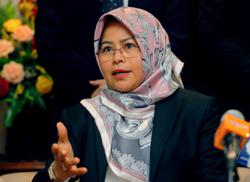 IPOH: Perak Mentri Besar Datuk Saarani Mohamad will be among the first to get the Covid-19 vaccine in phase 1 of the National Covid-19 Immunisation Programme, along with 33,503 frontliners in the state.

“Perak is expected to receive some 79,560 doses of the vaccine. Forty-nine vaccination centres are prepared, including Stadium Indera Mulia, ” he said.

“Priority will be given to those in the red zone, followed by yellow and green, ” he added.

Registration for the public begins in March at government or private clinics, via MySejahtera or at www.vaksinCovid.gov.my.

“The Health Ministry will announce a hotline number later and hold outreach programmes for inland areas, ” he added.

In Johor Baru, a portion of the vaccine supply that arrived in the country yesterday will be placed at four vaccine storage centres (VSC) in the state.

The supply, which is part of the first batch of Pfizer-BioNTech vaccines, arrived here from Singapore via the Johor Causeway, reported Bernama.

A DHL logistics lorry was seen on the Johor Causeway at about 1pm, before it arrived at the Sultan Iskandar Building (BSI) about an hour later.

The lorry was closely guarded by the Singaporean authorities along the Causeway until it reached BSI.

The vaccines are expected to be distributed to the four Health Ministry’s VSCs in the state beginning today.

Dr Adham, in a post on his official Facebook page, said 73,710 doses for Johor would be sent to the four VSCs.

“From the VSCs, the vaccines will be distributed to all 54 vaccination centres throughout Johor.

“Frontliners in Johor will be the first group to receive the vaccine in stages, starting this week, ” he added.