KUALA LUMPUR (Bernama): The defence team of Datuk Seri Dr Ahmad Zahid Hamidi has been told to advise him to refrain from attending meetings at least a week before his trial date, after the Umno president’s corruption case was postponed again as he is undergoing quarantine.

In granting the adjournment, High Court Judge Collin Lawrence Sequerah said this was not the first time the former deputy prime minister’s trial involving Yayasan Akalbudi fund had to be postponed for this reason.

The trial, which was scheduled to resume on Monday (Feb 22), was postponed for a third time because Ahmad Zahid had to undergo quarantine after coming into close contact with a positive Covid-19 case.

"That (the adjournment) will extend throughout the whole week until Thursday. This is not the first time that it has happened. Can you advise your client to not attend any meeting a week before his case because otherwise, the case will never conclude.

"I also had to vacate during the last occasion due to this problem. The trial dates that have been set are sufficient for the prosecution to conclude the case.

"As much as he has official functions to perform, attending court is no less important, so please impress on him (the need to stay away from meetings), ” Justice Sequerah said.

Earlier, Ahmad Zahid's counsel Hamidi Mohd Noh told the court that his client was unable to attend court today because he had been issued the Home Surveillance and Observation Order (HSO), which requires him to undergo home quarantine for 10 days starting Feb 21.

"My client is undergoing quarantine after one of the Umno supreme council members, Datuk Johan Abd Aziz, was confirmed positive with COVID-19 on Sunday (Feb 21).

"Ahmad Zahid informed (us) he attended two party meetings at the Institut Latihan Memperkasakan Ilmu (ILMU) in Janda Baik, Pahang. He was in the same meeting room with Datuk Johan, ” the lawyer said.

''We need proof that he actually attended the meeting and the fact that a meeting was convened that day ... where and when he was present and who were the others present in the meeting, to support his claim that he had come into close contact with the person (who tested positive), '' she said.

Raja Rozela also said the meeting was held in another state and it seemed like Ahmad Zahid had breached the movement control order by crossing state borders.

She said this would be the third time the case was postponed for a similar reason.

''I think a lesson needs to be learnt right now. It seems like the accused seems to be nonchalant and negligent of his wellbeing and also us.

''He also seems to take the trial not as important as his other businesses and is using this excuse to be away from the courtroom.

"A stricter reprimand by this court is needed," she said, adding that the defence must submit documents pertaining to permission to attend the meetings.

Hamidi then stood up and said it was not the court's concern asking for proof on the party meetings.

Justice Sequerah then said it was in fact the court's concern because this had disrupted the court's schedule.

"You can't say it’s not the business of the court ... It has an impact on the court in the sense that we cannot carry on (with the trial). The defence needs to furnish all the relevant documents on the meeting attended by Ahmad Zahid such as the permit to cross the state," he said.

The defence then submitted a letter from the Umno supreme council calling for Ahmad Zahid to attend the meeting.

The court then fixed March 4 for the trial to resume.

The prosecution is scheduled to call Malaysian Anti-Corruption Commission (MACC) investigating officer Fairul Rafiq Hamiruddin as the next witness in the trial.

Ahmad Zahid, 68, is facing 47 charges - 12 on criminal breach of trust, eight on corruption and 27 on money laundering - involving tens of millions of ringgit belonging to Yayasan Akalbudi. - Bernama 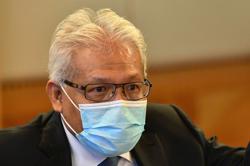 INTERACTIVE: Why Covid-19 vaccine queue-jumpers are a threat, and what can be done
Bersatu: We have decided
‘Pandemic or not, we are on track’ are completely on track, says Works Minister
‘Vaccine is safe for all ages’
MySejahtera app now tracks your registration progress
Sg Buloh ramming incident: Duo to be charged on Friday (March 5)
MACC investigating officer: Ahmad Zahid received two cheques worth RM6mil
Zahid slams Takiyuddin's 'refusal' to reconvene Parliament
Bersatu: Umno's decision to cut ties will have a major impact on any future cooperation
Retired cop shares experience of apprehending Botak Chin, Bentong Kali