‘Understand the Constitution’ before you quote from it, says Saifuddin PUTRAJAYA: All parties, especially politicians, must understand the Federal Constitution as a whole and not be selective, or interpret its provisions for certain purposes including those that could upset national unity, says Communications and Multimedia Minister Datuk Saifuddin Abdullah.

“There are times provisions in the Constitution are quoted but only part of them or (they are) misinterpreted, when in fact they are so well written.

“This includes taking into account the position of the majority, the minorities and the religions that they profess... it has been written clearly but poorly understood, ” he said.

He added that Article 153 of the Federal Constitution, which covers the special position of the Malays and natives of Sabah and Sarawak, is often cited by certain individuals to generate dissatisfaction.

However, he said these parties forget about the existence of Article 8 of the Federal Constitution, which among others, is about the need to ensure there is no discrimination against race or religion.

“Article 3 says that Islam is the religion of the Federation but the people are free to practise their religious teachings in peace and harmony, but often only part of it is quoted.

“This Constitution is written with specific objectives and it cannot be interpreted for other objectives that are not in it, ” he said, adding that Malaysians would live in peace and harmony if they appreciated everything in the Federal Constitution.

On another matter, Saifuddin said his ministry was working with the National Unity Ministry to develop content on Rukun Negara education.

The content being developed will not form a new subject to be introduced in schools, but will become one of the topics in various subjects like History, Geography and Bahasa Melayu, he said.

“We, prior to this, had proposed that education on the Rukun Negara be revived which among others will include a chapter on the Federal Constitution because we found that many have yet to understand the Constitution, including some political leaders, ” Saifuddin said.

Halimah was reported as saying that the matter will be refined through the setting up of a technical committee in her ministry together with three other ministries, namely, Communications and Multimedia, Higher Education and Education. – Bernama 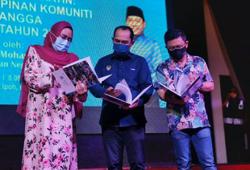