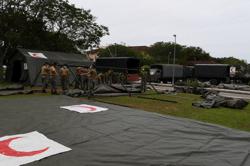 College venture: Amzar and Danish Aiman made full use of their time while stuck in their college hostel.

PETALING JAYA: Good business acumen and determination to succeed brought a RM19,000 windfall to two teenagers who were stuck in their college hostel due to the Covid-19 pandemic.

Accounting students Ahmed Amzar Airil Ahmed Mazdan and Danish Aiman Ahmad Rizal from the Penang Matriculation College in Kepala Batas decided to sell t-shirts to their hostel mates about a month ago and found it rewarding despite losing sleep over their venture.

They said that they decided to get extra income as they were stuck in their hostel due to the movement control order.

Amzar, from Bachok, and Danish Aiman, from Bangi, both 19, showed via a video clip, which has gone viral, what it took them to make RM19,000 in five days, armed with basic business skills and determination.

They bought the t-shirts from a clothing manufacturer in Selangor and went room-to-room to sell their wares.

They also said that they were laughed at by other students and even had their handphone numbers blocked by potential buyers after they initially agreed to buy the t-shirts.

“In the five days we were stuck at our hostel, we worked hard to promote our business to our friends through WhatsApp and Facebook.

“We also went from door to door and received 500 orders.

“Within the five days, we managed to get RM19,000 in sales, ” Amzar told mStar, The Star’s Malay language portal.

The two young men also received orders from matriculation students in other states.

Amzar said that he had previously sold yoghurt while Danish Aiman had gone into the cake-making business.

“We only slept three to four hours after morning prayers while we were handling the t-shirt business.

“We stopped at every door of the hostels as we didn’t want to miss out on any potential client.

“At times, we saw many pairs of slippers outside the room but no one would open the door and we could hear them laughing at us from inside.

“Some would give us contact numbers, saying they want to order but when we contacted them, they would block us, ” said Amzar, adding that both of them took such incidents in their stride. 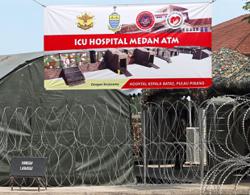