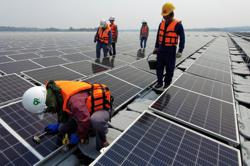 Shocking sight: Dhanamiah removing the garbage to prevent it from causing damage to the pontoons and boat propellers. — CHAN BOON KAI/The Star

GEORGE TOWN: After enjoying a brief respite during the movement control order last year, the water in Sungai Pinang has turned from brackish to “blackish” once again.

What used to be light jade-green colour after the first MCO last March has now turned black, with the water surface covered in black sludge.

Fisherman Dhanamiah Basamiah, 64, said food waste, plastic bottles, furniture and animal carcasses could be found under the pontoons at the fishermen’s jetty and boats berthed in the river known as one of the dirtiest in the country.

“Several weeks after the first MCO last year, it suddenly turned clean and I thought people would learn to love the river.

“But after several phases of MCO, and with factories and industries operating in full swing, the river is dirty and filled with all sorts of garbage once again.

“The stinky water is covered in a greasy layer of sludge and flows out during low tide, threatening our source of income.

“Every morning, we have to remove the garbage to prevent it from causing damage to the pontoons and boat propellers, ” said Dhanamiah.

Last year, it was reported that several weeks into the MCO, the 3.5km Sungai Pinang, located in the heart of the city, was jade green in colour with algae in what used to be a pitch-black flow polluting the Strait of Malacca. The foul blackness pervading the river for so long had also dissipated. 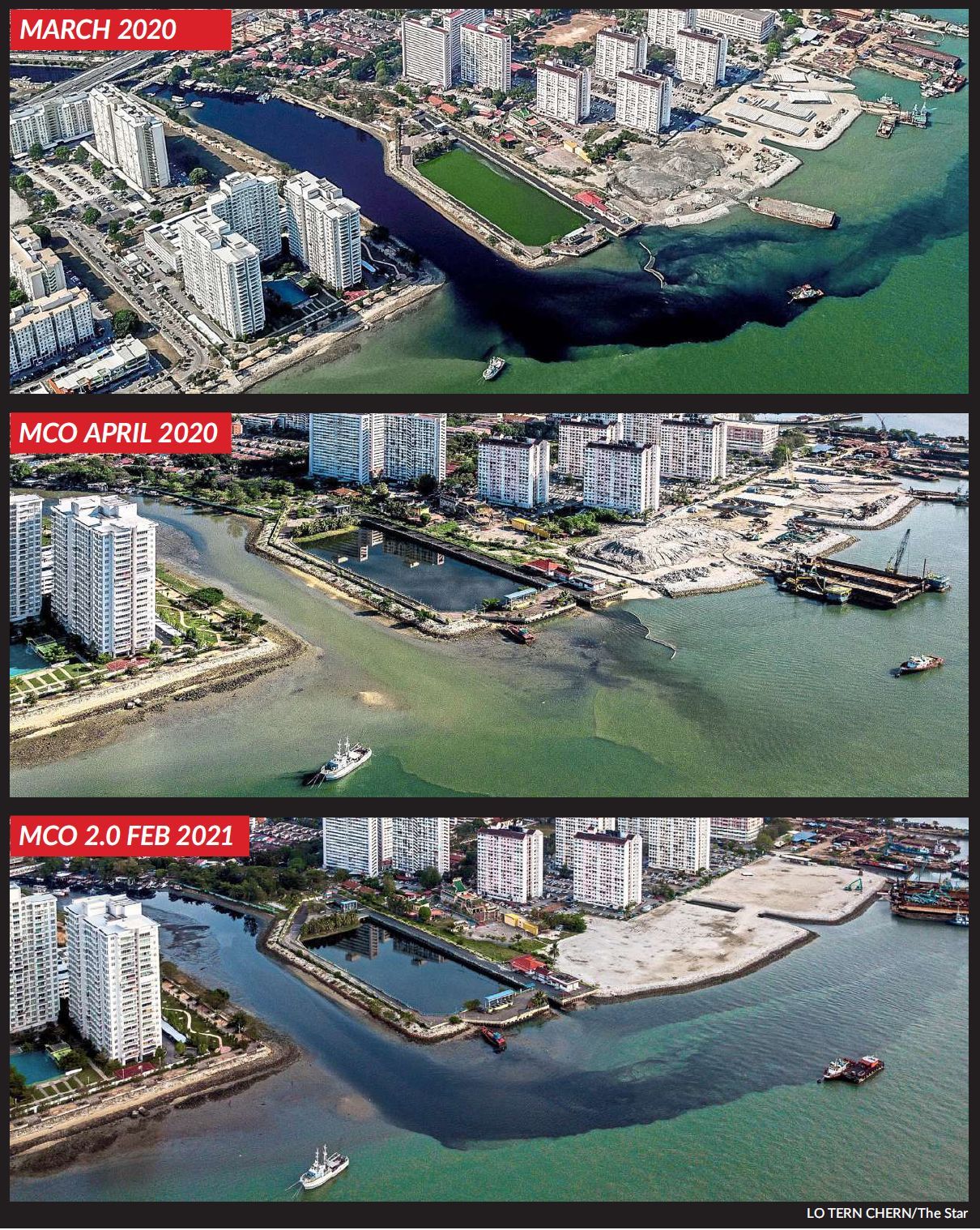 During the first MCO last year, the water in Penang’s Sungai Pinang turned a light jade-green when almost all factories and industries were closed. However, with MCO 2.0, garbage has transformed the river into a seeming cesspool, with dangerous consequences for human and marine life.

Photographs of the river, taken by The Star over a period of several months, were all shot at low tide to make a fair comparison, without seawater pushing into the river on a rising tide.

Fishmonger-cum-fisherman Abdul Hamid Abdul Jalil, 69, said public waste and that from industries led to an increase in garbage in the water soon after the MCO was lifted.

“Several years ago, the authorities found animal intestines and hair on the mudbanks.

“They managed to trace the source of pollution to a slaughterhouse upstream that had released effluents into the river.

“The government made some improvements, such as installing garbage traps, but this will never be enough if people continue dumping, ” said Abdul Hamid.

Universiti Sains Malaysia (USM) marine biologist Dr Zulfigar Yasin, who conducted numerous tests on the river, said it was heavily polluted based on the measurement of biochemical oxygen demand (BOD).

“A dirty river will have the highest level of pollutants and the lowest level of dissolved oxygen.

“Sungai Pinang has a low score for dissolved oxygen, recording only between 0mg/L and 2mg/L (milligrams per litre).

“A clean river would normally record between 8mg/L and 9mg/L of dissolved oxygen, with 3-5mg/L being almost the tolerance limit for marine life, ” he said.

Dr Zulfigar said the sight of black water could be traced to its cause where effluents in large quantities were discharged into the river without treatment.

“We have large amounts of domestic waste from homes as well as industries and factories ending up as pollutants and sediments in the river, which passes through all the densely populated areas. 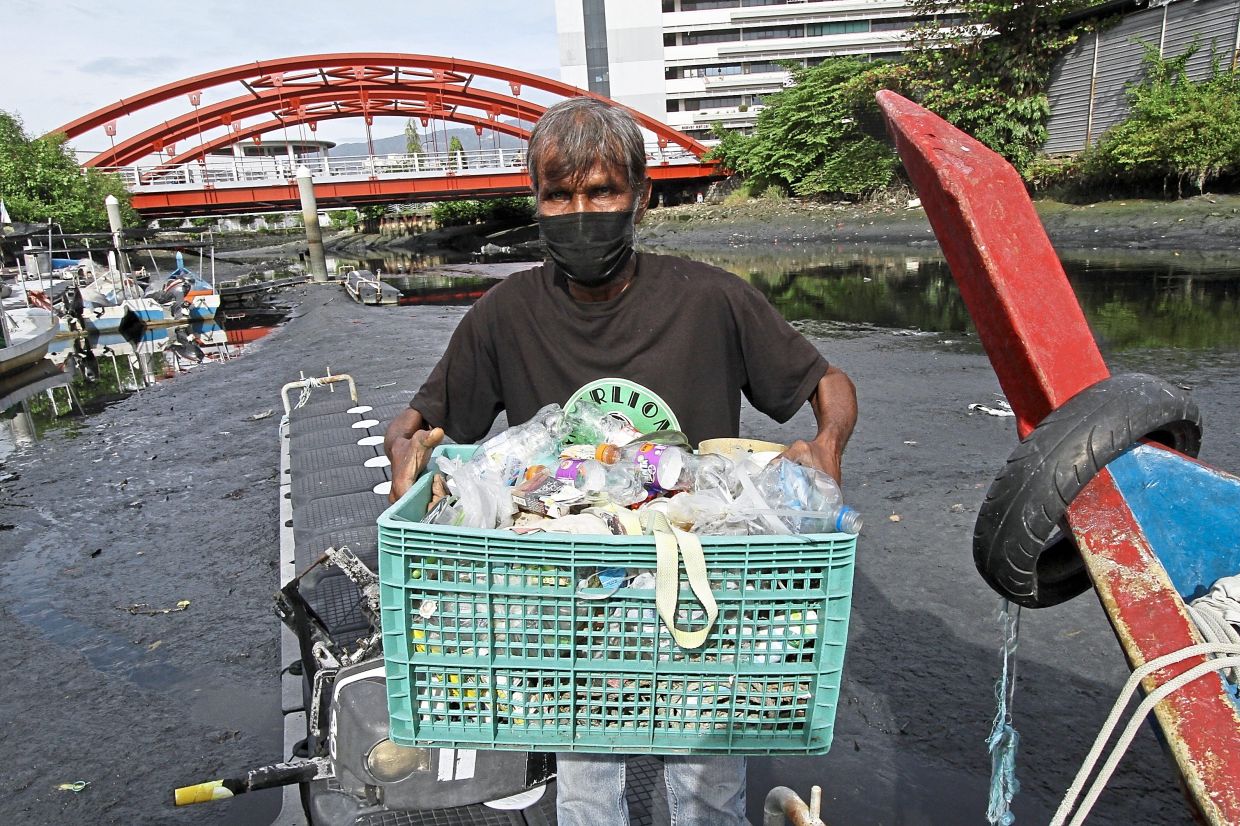 Dhanamiah showing a crate of garbage among many others collected by other fishermen at the jetty in Pengkalan Sungai Pinang.

“Domestic waste leads to organic pollution and these organic materials absorb the dissolved oxygen in the water. When the water is depleted of oxygen, toxic hydrogen sulphide builds up. This is evident with the smell of rotten eggs in the river.

“Without sufficient oxygen, food for fish as well as the fish themselves cannot survive.

“Over the years, the lack of oxygen and increase in sediments changed the river’s substrate, from a sandy riverbed to just mud and silt that is dark in colour and does not hold much oxygen, ” he said.

The Sungai Pinang river basin is about 50sq km, covering much of George Town and all of Ayer Itam plus Paya Terubong.

It is fed by six tributaries, all of which run through densely populated urban centres on the island.

Sungai Pinang’s water quality was categorised at Class Four, just one step below the dead river category of Class Five. There were plans to make it Class Two over 10 years ago.

“For years, Sungai Pinang’s water quality was stuck between Class Four and Five of the National Water Quality Standards.

“During the first MCO last year, it improved to Class Three, but only for a short period.

“It goes to show that if people reduce their waste discharge into the river, the water quality can improve within a short time.

“But as most sectors have started operating with the MCO restrictions eased a bit, we believe the water quality has gone from bad to worse, ” he said.

Sungai Pinang assemblyman Lim Siew Khim said the authorities were shocked to find the huge amount of garbage trapped in the log boom barrier installed in the river.

“I’ve requested the state DID install more log booms but it is very costly.

“If people stop dumping, we wouldn’t even need to spend. I feel this is common sense, that we should not throw garbage into rivers.

“With the Covid-19 pandemic, we can even see face masks thrown on the roads. This shows how some people still lack civic consciousness for the environment, ” said Lim. 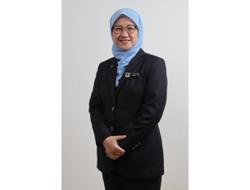 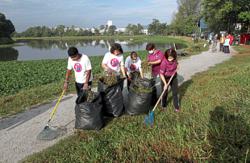