‘Ong’ for the Ong family

PETALING JAYA: When businessman Jason Ong envisioned his three sons living close to him, little did he realise that it would prove to be an astute decision years later.

His eldest son, Sooi Lee, 45, lives just next door to his terrace home in USJ2 while his second son Sooi Lye, 44, lives a few doors away along the same row. The youngest, bachelor Jeremy, 32, chose to stay with mum and dad.

Ong’s children and extended family, totalling 12 people, are looking forward to another Chinese New Year reunion dinner, which will be uninterrupted thanks to the government’s revised SOP on the annual event.

Under the latest guidelines issued on Sunday, only family members living within a 10km radius can gather for the reunion dinner. The number of family members cannot exceed 15.

“It is a blessing that my children live close to me and my wife. We are fortunate that we can be together this Chinese New Year.

“When the boys were growing up, I looked out for homes next to mine which were up for sale, ” said 69-year-old Ong, who hails from Penang.

The grandfather of five said in the early days, a traditional Chinese family would build a big house for all to live under the same roof.

Ong – “ong” is also Hokkien for prosperity – said the arrangement he made “is a modern way of looking at it”.

“We live in different houses to give everyone breathing space. All families need to have their own space, ” he said when met at his home yesterday.

He added that this year’s reunion dinner will be a simple affair to comply with the SOP.

“We will also be ordering one poon choi (traditional meal consisting of different ingredients) from a restaurant, ” he said.

He added that his wife Khoo Siew Tin, 67, would also be preparing some dishes.

Ong said the family would pray at home this time instead of going to the temple.

It will be a sunny Chinese New Year in most areas 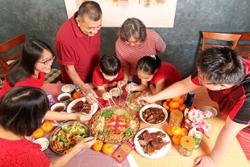