IPOH: A 49-year-old man has been charged at the Sessions Court here with three counts of raping his stepdaughter at his house since last year.

The accused - a night market trader whose name is being withheld - pleaded not guilty after the charges were read out before Sessions Court judge N. Priscilla Hemamalini on Monday (Feb 8)

He claimed trial for all three counts of raping his 13-year-old stepdaughter at a home in Ayer Tawar, near Sitiawan.

The offence under Section 376A of the Penal Code carries a maximum 30 years imprisonment and whipping upon conviction.

All of the offences were said to have been committed in the master bedroom of the house in Kampung Banjar between June to December last year.

Deputy Public Prosecutor Mohd Waffy Ismail requested that bail not to be offered to the accused.

“The victim’s mother had passed away last year April, and she is now staying with her aunt, who stays about 50m away from the house of the accused. With bail offered, this could cause trauma for the victim, who is already going through a lot, ” he added.

However, the accused's lawyer Shahrul Nizam Mohd Rabi, said his client was a slow learner and had a nine-year-old son to care for.

“With the difficult times due to Covid-19, he was unable to trade at the night market for a long time and his income was affected. I am requesting that bail is offered to my client, as he has yet to be found guilty.

“The court can impose additional terms for my client to report once every month at the nearest police station, and also to take an oath not to disturb the victim, ” he added.

Priscilla then allowed a bail of RM10,000 for all three charges with one surety, and imposed the additional terms.

She fixed March 11 for mention while waiting for the chemist and medical reports. 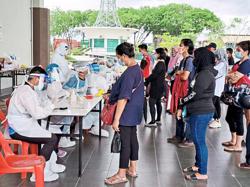