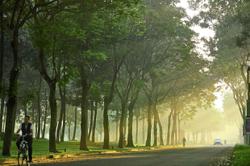 The Forest Park’s natural setting serves to enhance the biodiversity in the area. (Inset pic) Biodiversity audits found five near-threatened avian species in Gamuda Cove, such as this chestnut-bellied malkoha.

HOME seekers’ priorities are changing as Malaysia strives towards a new norm following the Covid-19 outbreak and resulting lockdowns. Chief among these is demand for outdoor spaces and a connection to nature.

However, southern Klang Valley has seen its natural heritage impacted by years of urbanisation, leaving residents wanting when it comes to recreation in natural settings. Biodiversity loss has also been linked to increasing zoonotic risks, as well as the rise of new pandemics today.

Stepping in to address these issues, Gamuda Land – known for its track record in building sustainable townships in harmony with the surrounding environment – is set to enrich the biodiversity of the area with the Forest Park and Wetlands Arboretum at Gamuda Cove, initiated by Gamuda Parks.

A natural sanctuary designed to promote wildlife conservation, nature research and forest fitness for residents, the initiative underscores the developer’s commitment to craft places for its communities.

“We are designing the Wetlands Arboretum within the 40ha Forest Park, drawing on the native knowledge of the orang asli community in Kuala Langat as well as the scientific research of arborists, to encourage collaborative efforts among environmentalists and the general public with the aim of fighting climate change and fostering education and biodiversity research, ” said Khariza Abd Khalid, head of landscape architecture at Gamuda Land and chief operating officer of Gamuda Parks.

“We have also established an indigenous nursery in Pulau Kempas which has produced approximately 10,000 Melicope lunu-ankenda saplings to date for tree planting activities within the Kuala Langat Forest Reserve and the Forest Park with the Global Environment Centre since 2016. Our designs and plans are guided by group-wide and global efforts in these areas.”

Sited within Gamuda Cove and located adjacent to the Paya Indah Discovery Wetlands, the Forest Park, including the Wetlands Arboretum, will be home to more than 300 species of flora and fauna once completed. Gamuda Land will also introduce 100% native species and 1,000 trees with conservation importance, as classified by the International Union for Conservation of Nature (IUCN). ‘The Wetlands Arboretum is a national biodiversity asset, allowing us to bring nature’s vibrancy back to Gamuda Cove, ’ said Khariza.

Restoration of these native species is vital to Gamuda Parks’ biodiversity preservation efforts in the area, and will also mitigate floods through the creation of deep root structures to channel underground water. Meanwhile, the IUCN Red List of Threatened Species was established in 1964 as the most comprehensive resource detailing the global conservation status of plant and animal species.

The Forest Park preserves 40% of existing secondary forest in collaboration with the Forest Reserve Institute Malaysia (FRIM), including 3,000 trees on site, in line with the developer’s commitment to protect species with conservation importance. This initiative will also improve the Forest Park’s ability to store large amounts of carbon.

In addition, the wetlands will benefit from the planting of approximately 7,000 new trees. Gamuda Land will invest RM24mil towards the initiative, with RM3.7mil for tree-planting activities.

The Wetlands Arboretum sited within the Forest Park also underscores the role Gamuda Land has taken in safeguarding the wetlands to conserve the biodiversity of the natural site, while raising public awareness about the importance of wetlands as ecological features, providing food and habitat for fish and wildlife (including threatened and endangered species), water quality improvement, flood mitigation, shoreline erosion control, economically beneficial natural products for human use, and opportunities for recreation, education and research.

Gamuda Cove residents can connect with nature in the Forest Park as well, with activities such as jogging, jungle trekking and bird-watching. As a wetlands sanctuary, the project also combats global warming through sequestration of environmental carbon and carbon-rich organic sediments.

A vision for Southern Klang Valley

The widening of water bodies and waterways within the Forest Park minimises impacts to the Paya Indah Discovery Wetlands by mitigating floods via the channelling of stormwater.

Meanwhile, the Wetlands Arboretum will catalyse economic growth in the area by creating green jobs and eco-tourism opportunities. In addition, its water features and natural setting enhance the well-being of surrounding communities, while promoting healthy interaction between them and the natural environment. Residents can indulge in forest fitness activities such as jogging and cycling at the Forest Park.

It is headed by Gamuda Parks, an initiative bringing holistic management and consistency to Gamuda Land’s biodiversity enrichment, conservation, nature education, and township design and maintenance efforts across its portfolio. Gamuda Parks works with industry advisors such as FRIM and Alam Sekitar Malaysia (ASMA) to sustain the developer’s 25-year legacy in natural landscaping.

Listening to the land

As part of its biodiversity rehabilitation efforts, Gamuda Land has to date audited six of its townships to establish a baseline for biodiversity and benchmark subsequent growth.

“Insights from these studies are used to foster vibrant ecosystems within Gamuda Land developments.

“Designed to include an arboretum, which means ‘living tree museum’, our Forest Park facility is a national biodiversity asset.

“Here, we can propagate rare gene seeds of tree species with conservation importance, work with the orang asli community, while nurturing tree specimens for study, transport and planting, as we support the Energy and Natural Resources Ministry in its campaign to plant 100 million trees nationwide by 2025, ” said Khariza.

Gamuda Parks envisions the project to serve as a basecamp for seed and tree storage as well as recycling of organic, garden and general waste, while offering on-ground research and collaboration opportunities for conservationists and others keen to study and explore its natural treasures.

The Wetlands Arboretum is planned in two phases, with the first phase projected for completion by end-2021.