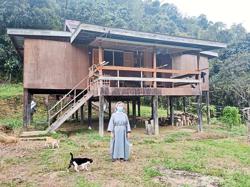 Beacon of light: Sister Mary and the shelter home she built together with the villagers in Tambunan.

KOTA KINABALU: When England-based Catholic nun Nora @ Mary Annunciata Marcus asked to be sent back to her hometown of Tambunan, a rural district in Sabah, all she had in her mind was to retire.

Never did the 61-year-old think that she would be given bigger tasks and challenges upon returning, which happened very soon after her arrival in 2018.

Sister Mary was in England since 2004 and was last attached with the Order of St Claire, the United Kingdom.

“When I got back to Tambunan, people including juveniles, pregnant teens, single mothers, parents with disabled children and others started coming to see me.

“They asked if they could live with me.

“Some asked whether I was willing to help them with their unborn children, ” she said.

Sister Mary, however, said she did not even have a large home to begin with, let alone resources to take care of another person.

She told them that she could not as yet and that there were so many things that needed to be prepared if she was to allow people to live with her.

“I tried going to the local authorities and associations that I felt could help in the cause but there seemed to be a dead end for me until I met Tambunan assemblyman Datuk Dr Jeffery Kitingan who agreed to let me use a piece of his land to set up the charity home.

“I took out all the savings of about RM30,000 that I had and bought construction materials, and with the help from villagers, we managed to build a four-bedroom wooden house in Kg Makatip Pagalan.

“Now, I have over 20 people ranging from children to adults, abled and disabled, living in the small house, and some come and go, ” she added.

It was with the help of villagers that Sister Mary managed to get through her daily chores, especially in preparing food for the residents.

“The villagers here are mainly poor or low income earners but they come every day, sending food from their backyards, from their farms and from rivers, ” she said, adding that she, too, planted some vegetables for food.

Sister Mary said that seeing how these people came to help out even though they had trouble feeding their own families pushed her to persevere with the project.

A friend, Lily Fung, who knew about the efforts, asked if she needed clothes for the children and residents, to which she said yes.

“She then offered to forward the request to her friends and family, who later spread the word on social media and that was how it sort of went viral with quite a number of people offering to send us used items and foodstuff, ” added Sister Mary.

She said more and more people with social, mental and even family issues came to seek shelter and help.

“What we really need now is someone who is able to fund us on a long-term basis, so that I can properly hire help and arrange for transportation every time someone needs medical attention, ” she added.

Sister Mary said that if there were children born out of wedlock or due to rape or any circumstances put under her care, she would take care of them no matter how hard it would be.

“I hope we can get the help we need to help these people. They are victims of circumstances, all of them are regardless of their condition, ” she said.

Those wishing to lend a helping hand can do so by contacting Sister Mary at 011-1421 3291, but one may need to try a few times and even days before they can reach her due to the location of the charity home and poor phone connection.

The charity home is registered with the Registrar of Societies and has an account under Persatuan Kebajikan Makatip Sabah, Bank Simpanan Nasional account number 1213741100006512.