PJ OCPD is all for helping those in need

Needful things: ACP Nik Ezanee (left) buying the items the woman had attempted to shoplift from the supermarket. — Photo sourced from Facebook

PETALING JAYA: The idiom “A Good Deed a Day” is now synonymous to the men and women of the Petaling Jaya police headquarters.

The concept, which is the brainchild of Asst Comm Nik Ezanee Mohd Faisal, is aimed at helping those in need in the community.

The 43-year-old OCPD and Petaling Jaya police grabbed the headlines again recently when when they assisted a mother of three children, who was forced to steal items such as “cool fever” patches, a pandan cake and sausages from a supermarket.

ACP Nik Ezanee subsequently closed the investigation by classifying it under No Further Action (NFA) after hearing the circumstances behind the incident.

He then compensated the supermarket for the stolen items before donating them to the woman while cooperating with the Welfare Department to provide further assistance.

“Stealing is definitely a crime but if we punish a poor family which is going hungry, it is wrong.

“There are two sides to this argument. One, those who supported the move as we were able to assist the woman and her family.

“The others say we are promoting or encouraging people who are in a similar predicament to steal.

“However, that is not my intention. If my actions have caused distress among the community, I apologise to all parties, ” he said in an interview recently.

ACP Nik Ezanee clarified that he met the woman to advise her not to resort to crime.

“No matter what hardship befalls us, there will surely be a solution.

“The government has prepared various avenues to assist those in need, including through the Welfare Department, Lembaga Zakat, mosques as well as other houses of worship.

“I even told the woman that if she ever fell on hard times again, to come to the police station and Insyallah I will assist, ” ACP Nik Ezanee said.

His good deed, which has since gone viral on social media, has also had positive impact, with more people being aware of the functions of the Welfare Department and Lembaga Zakat, he said.

“I hope the increase in awareness will deter those in need from resorting to stealing or any crime for that matter.

“The Lembaga Zakat chief executive officer also informed me that there are various aid provided for those who are in need but it is not known to the people.

“Now I understand the real function of Lembaga Zakat. I am working now with them to identify those in need in Petaling Jaya, ” he added.

ACP Nik Ezanee said he was also planning to give Lembaga Zakat the avenue to distribute food, necessities and other forms of aid for two days at the Petaling Jaya police headquaters soon.

“As the OCPD, I know many resident associations in the area and I have asked for their assistance to identify those in need.

“I hope that such act of kindness will be an example and add value to the service of the police force, aside from our core duty of law enforcement, ” he said. 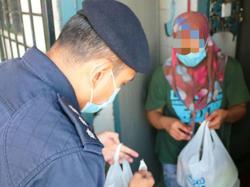