KOTA KINABALU: Former Sabah deputy chief minister Datuk Christina Liew (pic) has won a defamation suit against a planter who uttered and wrote malicious statements in a viral video about her a few days prior to GE14 in 2018.

The Api-Api assemblyman was also allowed an injunction restraining the planter, Leksun Injil, or his servants or agents or otherwise, from publishing or causing to be published or contributing to the publication of the defamatory video of the plaintiff.

In his verdict, JC Shim said Liew had proved on a balance of probabilities that the words were defamatory to her, they referred to her and there was publication of the words to a crowd on Gaya Street.

JC Shim said the plaintiff’s cause of action for libel and slander has been proven on a balance of probabilities. The trial was heard from July 20 to 22 last year, where Liew had called three witnesses including herself to testify while Leksun was the sole witness. 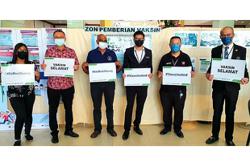