KOTA KINABALU: The cost to repair the damage caused by a landslide recently near the Kinabalu National Park entrance in Kundasang is estimated between RM30mil and RM40mil.

“We hope work on the hilly area can commence as soon as the risk assessment study and discussion among the related agencies have been completed.

“The ministries and agencies involved will also work with the geologists to ensure this area is not only safe but can be redeveloped because Kundasang is an important place for the local communities as well as a tourist attraction, ” he said after visiting the affected site yesterday.

The landslide on Wednesday, following continuous heavy rain since the week before, damaged the park’s parking area which was already cordoned off due to soil movement last year.

Presently, only one lane is opened to traffic while a restaurant next to the parking lot had been closed since the movement control order started.

Bung Moktar, who is also Sabah Public Works Minister, added that while the repair works must commence as soon as possible, the authorities needed to study the soil movement.

“We do not want a repeat, after re-building (the road and parking area) only for it to collapse again, ” he said.

Meanwhile, Sabah Tourism, Culture and Environment Minister Datuk Jafry Ariffin who also visited the site said he had discussed with Bung Moktar to give priority to restoring the area.

“It is a popular spot among the local and foreign tourists, ” he said. 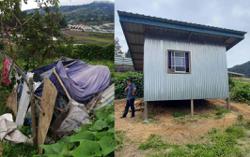