PETALING JAYA: It is a "classic' move of the DAP to compromise its principles for the sake of gaining political power, says an MCA central committee member.

In a statement, Lau Chin Kok said DAP will stick by its principles only when it suits its interests.

He was referring to Sekinchan assemblyman Ng Suee Lim’s recent remarks that it was possible for DAP and Umno to work together in the “new normal”.

Ng, who is Selangor assembly Speaker, said he supported the notion that DAP and Umno could be partners in Perak, during the political crisis which saw Datuk Seri Ahmad Faizal Azumu ousted as the state Mentri Besar.

Lau said that Ng’s comments were hardly surprising, in light of the comments of other party members such as Perak DAP chairman Nga Kor Ming.

“In a bald-faced (but no less impressive) feat to disguise the abuse of voters’ confidence to satiate their greed for political power, they began peddling a trumped-up story that their disposition to work with anyone was for the sake of a ‘multiracial, strong and stable government’.

“Still, the shrewd could see people are being taken for a ride, and would not let that distract them from the inevitable realisation that DAP would shift their positioning to wherever best serves their personal objectives, ” he said on Monday (Jan 25).

He added that after DAP had relentlessly blasted Umno for decades and monopolised the Chinese votes, the party was now willing to abuse the trust of the Chinese community as political leverage to broker a self-serving deal with Umno.

“It wasn’t that long ago that DAP would demonise the cooperation between Umno and MCA in order to paint a sanctimonious picture of themselves just to win elections.

“Nowadays, DAP is seemingly a shadow of their former selves, ramping up their propaganda machinery to flatter and pave the path to work with Umno.

“Many DAP politicians are unequivocally textbook opportunists. It will always be a case of power-over-principle for them," he said. 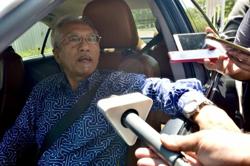