Precarious situation: The condition of a house after a landslide occured near the water treatment plant in Paitan. — Bernama

KOTA KINABALU: Landslides and collapsed roads continue to occur despite the improving weather in some parts of Sabah following a week of downpour and floods.

The latest reports of such incidents are in Kinabalu Park on the foothills of Mount Kinabalu and Paitan but no casualties were reported as yet.

The Kinabalu Park road collapsed at about 1am yesterday, whereby a parking zone was among the stretch of road that fell.

Ranau OCPD Deputy Supt Sammy Newton said they received a call about it at 7.15am and the damage was about 150m in length, 100m wide and 200m deep.

“We believe this is due to the continuous downpour over the past few days but it has yet to affect the main road, ” he said when contacted.

The main road is still passable but for those who do not wish to use this route, they can choose alternative roads to Ranau or Kota Kinabalu, among other districts.

The collapsed road does not involve residential areas.

Sabah Parks had already sealed off the area which had shown signs of cracks and instability since last month.

Temporary signboards and barricades had been put up to warn road users.

Kundasang assemblyman Datuk Joachim Gunsalam said the damaged road and hillside would be repaired as soon as possible.

In Paitan, a house was damaged following a landslide near the water treatment plant on Tuesday night. Jalan Nangoh Paitan Kanibungan is totally inaccessible for the time being.

Seven other areas including those in Kudat, Pitas, Kota Marudu and Kota Kinabalu suffered landslides while more than 40 roads are still affected by floods as at noon yesterday. 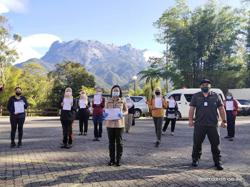