BUTTERWORTH: A broker, who allegedly clobbered a pregnant cat and a kitten to death with a metal rod last month, has been charged in a Sessions Court here with cruelty to animals.

Hah Choy Kheng pleaded not guilty to the charge after it was read out to her before Sessions judge Norhayati Mohamad Yunus.

The 51-year-old was charged with beating the cats with a 75cm metal rod resulting in their deaths.Hah is accused of having committed the offence at a playground near Blok B1, Pintas Kalui, Seberang Jaya at 1.20pm on Dec 29,2020.She was said to have done so after she thought that one of the cats had defecated in front of her house.

A video of the alleged attack had been making its rounds on social media.

The charge was framed under Section 29(1)(a) of the Animal Welfare Act for cruelly beating, kicking and torturing animals.

Prosecuting officer from the state Veterinary Services Department Roziman Awang Tahrin asked the court to impose bail at RM10,000, taking into account the severity of the punishment, and the fact that the matter had gone viral.

Norhayati allowed bail at RM10,000 in one surety for the accused and set March 4 for mention. 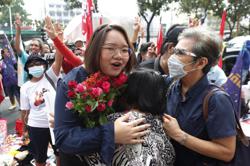