KLANG: When income is scarce, financial help is a lifesaver to struggling families.

This is the case with the government’s announcement that the Bantuan Prihatin Nasional Phase 2 (BPN 2.0) will be expedited, with many expressing gratitude.

“I have lived through severe hardships in my life but was able to go out and do odd jobs at any time then to get some money.

“Now, odd jobs are difficult to come by due to the movement control order, ’’ said Ahmad Zaini, who lives in Port Klang.

He said his family endured a critical test in 2019 when they became homeless and had to cram into their car parked at a playground in Pandamaran here.

Fortunately, help arrived when their plight was highlighted by The Star later that year.

“Due to our experience, we greatly appreciate help such as the BPN payouts by the government, ’’ he added.

The BPN will be received by 11.06 million M40 and B40 eligible recipients, with the payout scheduled to be credited directly into their bank accounts from Jan 21 and 25 respectively.

Taxi driver C. Satkunaseelan, 68, described the payout as most timely.

“Taxi drivers have been seriously affected by the pandemic with many public transport users shying away, ” he said.

He said the latest movement control order would lead to almost no business for cabbies.

“So this upcoming BPN payment will be well received. And any amount during difficult times will be big, ’’ said Satkunaseelan from Tepi Sungai here.

He said he barely made between RM30 and RM50 daily these days, with RM30 going towards his daily taxi rental.

As for ML Lai, who is jobless due to health reasons, the BPN payout this month would be vital.

The 60-year-old from Sungai Buloh had to leave her sales job several years ago due to fatigue and depression.

“I make do now with help from family members and doing some sales job. But I have no fixed income.

“So the the BPN payout will come in handy for me to get things that I cannot generally afford to get, ’’ she added.

In Johor Baru, A. Siva Rao, 27, who lost his job as a security officer in Singapore last September, said he was grateful for the aid.

“I recently received a job offer to be a security officer in Singapore but am unable to take it up as I do not have enough money to pay for quarantine expenses there.

Trader Mohd Fauzi Azmi, 52, who was forced to close his coffee stall due to the latest MCO, said he would need to depend on his wife’s teacher salary to support their family of six.

“Now that I cannot operate my stall, I will have zero income for the next two weeks or longer if the MCO is extended, ” he said, adding that all his children aged between 13 and 22 were still studying.

“Even before the latest MCO, I could hardly get any passengers and depended solely on delivery orders, ” said the father of two.

In Ipoh, a cashier who wished to be known as Sara Lim, 27, said she would use the payout to start a new job as a sales agent.

“Under the first BPN, I received RM500 which I used to buy groceries for my parents. I kept the remainder for emergency purposes.

“Since then, I have been reading financial books and I think the best way to spend the money is to generate more income for myself and my family, ” she added.

On Wednesday, Finance Minister Tengku Datuk Seri Zafrul Abdul Aziz said payments to the B40 and M40 groups would be credited directly into their bank accounts starting Jan 21 and Jan 25 respectively.

Those without bank accounts will receive their payments at Bank Simpanan Nasional branches from Jan 25 onwards, subject to the bank’s SOP guidelines, he said in a statement.

As for recipients in Sabah and Sarawak who do not have a bank account, the minister said payments would be made from early February to April 1 at locations to be announced at the month’s end. 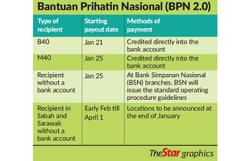 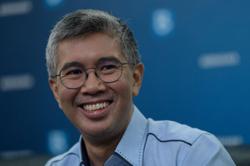