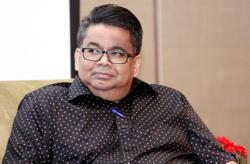 The tweet on Thursday (Jan 14) drew the ire of several netizens and professionals who slammed his act as "irresponsible".

"Try this... I have started... May help to prevent virus attack!" Rais said in his tweet which accompanied the handwritten ayurvedic concoction titled "Corona Kashayam".

The turmeric based preparation purportedly is able to prevent Covid-19 and even cured a doctor, who tested positive, within a day.

Several social media users were quick to poke fun at Rais' tweet with some pointing out that the snake-oil remedy had been debunked as fake news in India.

Twitter user @azkarsidik said Rais, who has a doctorate, should not be promoting "pseudoscience".

"We practise evidence-based medicine or EBM.

"These kinds of irresponsible claims will confuse people more and encourage them to seek treatment such as this without evidence," he said when contacted Thursday (Jan 14).

Dr Raj Kumar added this could lead to delay in medical treatment and result in complications or spread of the disease.

"The sick who are desperate and vulnerable will try all alternatives.

"However, while trying other alternatives, they should still see their doctors as well," he said.

He said the tweet should be removed immediately before it misleads the public.

"Any cure or remedy must be evidence based and approved by health authorities," he said.

He advised the public to be cautious of people or companies claiming to have found a cure for the virus.

A similar "Corona Kashayam" recipe appeared on social media and went viral in India last June in India but was soon debunked.

An ayurvedic doctor said a "kashayam" should be treated as an immunity booster and not as a cure for Covid-19.

Try this... I have started... May help to prevent virus attack ! pic.twitter.com/MzoQjA9TpR