Kicking off the Halatuju SMJ engagement open day on Tuesday (Jan 12), he said the public service as the pulse and machinery of the government, must give full commitment to making it a success.

“I hope no civil service staff takes this lightly, even more so no one should try to boycott or refuse to cooperate in implementing the government's policies.

“As the Chief Minister, I have a big responsibility to the people and both the leadership or management level and civil service must work together to realise this Halatuju or strategic direction for Sabah, ” he said in the event which was livestreamed to ministries and agencies that attended the virtual event in their own offices.

He said the Halatuju, which he mentioned back in Dec 18 last year when tabling the state budget, was the state government’s effort to create a holistic framework to revive the state economy and determine the state’s progress.

“Strategic direction is needed to ensure continued progress, even though our state is also impacted by Covid-19, ” he added.

Hajiji said the new movement control order (MCO) in Sabah starting Wednesday (Jan 13) and the announcement of state of emergency, will be among the challenges faced in administrating the state, but they would continue to proceed with creating the Halatuju as planned.

Meanwhile on the open day, he said this was the third step in framing the Halatuju, with the first step determining the concept and objectives, followed by internal engagement of ministries, state departments and agencies to develop the framework further.

“I believe this has been undertaken and now we enter the third step of collecting feedback from all stakeholders so that Halatuju SMJ really fulfilled the people’s aspirations from all levels, ” he added.

Sabah Public Service Department in a statement said a website will be created soon to allow e-participation from all quarters to give suggestions to the government, in order to develop an all inclusive Halatuju. 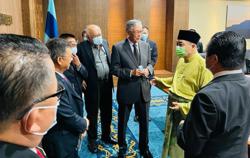