Reality show champions open to the idea of becoming a couple 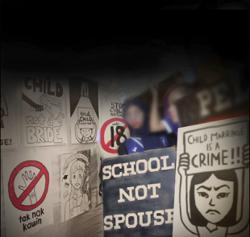 THE duo who were crowned champions in the second season of the reality show Lagu Cinta Kita are not discounting the possibility of a romance between them, Berita Harian reported.

Khareez Kasbulah and Farah Nadeera Zaini won RM50,000 in cash along with the opportunity to produce a single and music video.

The pair admitted that the intimacy displayed during their final performance was a genuine reflection of their relationship.

“This matter is simple. We cannot lie about what is in our hearts and what people saw on stage was not an act, ” said Nadeera.

Khareez added: “It is all up to God and I would not say no if I was destined to be with Nadeera. After all, I like her character. If we are destined to be together, why not?”

Kota Setar District Religious officer Sheikh Ahmad Faisol Omar said couples were willing to pay up to RM8,000 for their marriage registration with the syndicates.

The matter was only uncovered when couples went to register the birth of their child with the National Registration Department (NRD).

He reminded couples that matters related to marriage could only be carried out by religious officials and within their premises only.

> Teenager Nur Aleeya Maisarah Mansor and her family in Raub, Pahang, had to hang on to their roof beams for 10 hours after their house was submerged in floodwaters before being rescued.

“We did not expect the water to rise to the roof level. We had to climb onto the wooden beams to save ourselves, ” said the 18-year-old.

“Usually, even though the area is flooded, the water never rises to the roof.”

Nur Aleeya said it was only a matter of hours before the water level rose inside their house.

She and her parents were rescued by authorities and sent to a temporary evacuation centre at the Kampung Pia multipurpose hall.