JOHOR BARU: Police have crippled a major Macau Scam syndicate which used its ill-gotten gains to buy property and invest in cryptocurrency totalling more than RM336mil.

At least 12 suspects – nine men and three women – were arrested in a series of raids in Penang and Kuala Lumpur last month.

Among the suspects were company directors.

Victims who have been duped by the syndicate would first be told to transfer money into a mule account.

“The money is then channelled to another mule account belonging to another company, ” he said, adding that all the mule accounts belonged to syndicate members and were designed not to leave a money trail.

Comm Ayob said the funds were then transferred to a property developer in Penang to purchase property and invest in Bitcoins.

“This modus operandi aimed to avoid detection from the authorities and was their way of money laundering, ” he said during a press conference at the Johor police headquarters yesterday.

“Since June last year, some RM25mil has been used to make progress payment for 100 condominium and commercial units in George Town, ” he said.

Based on the Sale and Purchase Agreements, two companies are involved in property acquisition in 2015 totalling RM336mil.

Comm Ayob said the two companies belonged to the 55-year-old mastermind who has a criminal record. He is believed to have fled the country and is currently hiding in Thailand.

The man’s two sons are directors in the companies.

“Our investigations showed that some of the proxies and directors in the bogus companies are paid RM16,000 monthly, ” he said.

The 12 suspects, aged between 29 and 68, have since been released on police bail.

Police are probing the case under Section 420 of the Penal Code for cheating. 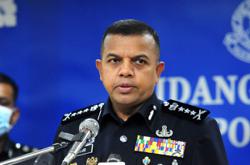