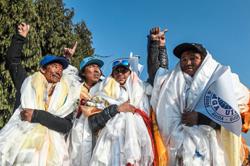 Mohanadas (L) and Magendran with the Malaysian flag at the peak of Mount Everest.

KUALA LUMPUR (Bernama): When Datuk M. Magendran and Datuk N. Mohanadas, the first Malaysians to set foot on the peak of Mount Everest more than two decades ago, they communicated with walkie-talkies and had to wait more than 10 days to see the photos they took on the world's highest mountain.

Today, technology has come a long way, and with Huawei and China Mobile's success in installing two 5G base stations on the mountain last April, climbers can now use various communication devices, including smartphones, and directly upload photos and videos of their travel with the device, up to an altitude of 6,500m.

Magendran recalled that the Malaysia-Everest 97 Expedition, led by now-deceased Nor Ramlle Sulaiman, to the highest mountain in the world was equipped with the most advanced equipment at that time in the attempt to conquer the 8,848m-high peak.

It included walkie-talkies, Inmarsat-B satellite phones supplied by Telekom Malaysia (TM) – which also installed transmitters at the peak of Mount Kala Patthar, a mountain with a height of 5,643m near Everest – to facilitate communication between climbers and the Everest Base Camp (EBC).

Radio Televisyen Malaysia (RTM), as the broadcast sponsor, also sent a crew to set up a mini studio at EBC and install telecommunication equipment, such as parabola for live broadcasting from an altitude of 5,400m.

Magendran, who is now the principal of Sekolah Menengah Kebangsaan Taman Sri Muda, Shah Alam, said his team members also brought along a barrel of AAA batteries as the expedition team needed to change their walkie-talkie batteries regularly.

He said when in such cold conditions, batteries tend to deplete quickly so the team had to constantly replace them or kept wrapped in a blanket to keep the cold out.

"Although we had six cameras when we were at the peak, but most of them had jammed.

"At that time we used film, so we could not check if the picture taken was good or not. We had to come back to KL to send the films to the shop for processing.

"It is not like now, we can know on the spot if the picture we take is beautiful or not. In terms of communication, the equipment now is indeed sophisticated," he said during a hill climb with Bernama staff at Bukit Wawasan, Puchong near here, recently.

Magendran, 57, said as soon as he and Mohanadas arrived at the peak of Mount Everest on May 23,1997, they contacted the radio base provided by the Malaysian team at Camp 2 (6,500m) via walkie-talkie which then conveyed the message to EBC.

From EBC, he said, RTM made a live broadcast announcing the news that was much awaited by Malaysians.

Unfortunately, the team could not speak to the then-prime minister Datuk Seri Dr Mahathir Mohamad (now Tun), who was in London because the weather in the Himalayas was not good, he said. Mount Everest and other mounts ranges are pictured from Namche Bazar in the Everest region, some 140km northeast of Kathmandu. The highest point on Earth got a bit higher on Dec 8 as China and Nepal finally agreed on a precise elevation for Mount Everest after decades of debate. The agreed height unveiled at a joint news conference in Kathmandu of 8,848.86 metres was 86cm higher than the measurement previously recognised by Nepal, and more than four metres above China's official figure. - AFP

Meanwhile, on the congestion reported at the peak of Mount Everest in recent years, Mohanadas said it was due to the lack of commitment by the Nepalese government to limit the number of people allowed to climb Mount Everest.

According to him, more than 500 climbers attempt the climb every year compared to less than 200 two decades ago.

"Climbing has become popular now and many can afford it. The route for travel and the climb is narrow and dangerous – when many are given permits, the situation will be so congested that climbers have to queue to wait for their turn.

"When there are too many people, it is quite difficult to keep safe in the event of any disaster such as an avalanche or bad weather. We were lucky to be able to spend an hour at the peak in 1997, but now, the climbers can only be at the peak for a few minutes," said Mohanadas who celebrated his 59th birthday last Monday.

To prevent frostbite when climbing at high altitude, he advised climbers to always follow instructions given by the authorities and wear high quality cold-resistant clothing.

Of the last 20 trainees, only 10 participants were selected to continue the climbing mission to Everest with four climbers – Magendran, Mohanadas, Mohamed Fauzan Hassan and Gary Chong Kim Wah – reaching Camp 4 (the last camp) at a height of 8,000m, before the two friends withdrew due to health factors. – Bernama