High Court judge Justice Mohd Nazlan Mohd Ghazali set the date after hearing submissions from both parties at the end of the defence case yesterday.

Justice Mohd Nazlan said he would give his decision on the matter at 9.30am on Feb 3.

The hearing of the case began on Oct 8 last year, with the prosecution calling 22 witnesses to testify, including former Felda director-general Datuk Hanapi Suhada.

On Sept 3, the defence closed its case after calling six witnesses to testify, with Mohd Isa called as the first witness.

Mohd Isa is facing nine counts of dishonestly receiving gratification for himself, in cash totalling RM3,090,000 from Ikhwan through one Muhammad Zahid Md Arip as gratification for helping to approve the purchase of the hotel by FICSB for RM160mil.

All the offences were allegedly committed at Menara Felda near here between July 21,2014 and Dec 11,2015.

All the charges were under Section 16a(A) of the Malaysian Anti-Corruption Commission (MACC) Act 2009, punishable under Section 24(1) of the same law, which provides a jail term of not exceeding 20 years and a fine of at least five times the bribe amount, or RM10,000, whichever is higher, upon conviction.

On June 16, the High Court ordered Mohd Isa, who is also former Negri Sembilan mentri besar, to enter his defence on the nine charges after finding that the prosecution had succeeded in creating a prima facie case against him.

However, the court acquitted him on a charge of criminal breach of trust (CBT) in connection with the purchase of the hotel. —Bernama 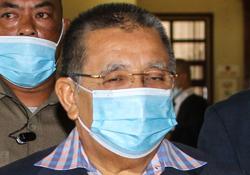