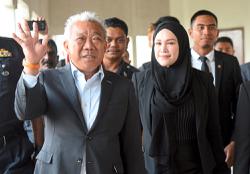 KUALA LUMPUR: A Sessions Court judge, who is hearing the corruption case of Datuk Seri Bung Moktar Radin (pic) and his wife, Datin Seri Zizie Ezette A. Samad, expressed disappointment that she had to vacate the dates which had been fixed to hear the case this week.

Judge Rozina Ayob had to move the dates to allow the Kinabatangan MP, who is a Sabah deputy chief minister, to attend the State Legislative Assembly (DUN) sitting.

She reprimanded Bung Moktar’s lawyers for the delay in sending the letter to request for the dates from Dec 21 to 24, to be vacated, saying that the letter was only sent on Dec 17.

“I am very disappointed, I’m sure you know the Sabah DUN sitting schedule much earlier, I think 14 days before the sitting. The prosecution has checked the procedure for the DUN sitting, its requirements, and so forth.

“I’m sure you know much, much earlier. Why only last minute, on Dec 17, was the letter sent?

“Because, (you know) why, we are wasting court’s time. If indeed, the case cannot proceed, at least I can call for other cases to hear. So now you have wasted my whole entire week, ” she said.

Yesterday, the court was supposed to continue hearing the case for the defence to cross-examine the ninth prosecution witness, special officer to former Felcra chairman Nazrul Aswad.

Lawyer Datuk K. Kumaraendran, representing Zizie Ezette, said the defence took full responsibility for the delay and apologised to Rozina on behalf of Bung Moktar’s lawyer, M. Athimulan, who was unable to appear in court yesterday.

Kumaraendran also told the court that Bung Moktar, who is Lamag assemblyman, was informed at the last minute that he had to answer some questions during the state assembly sitting.

To this Rozina said they should have at least notified the court that they might not be able to turn up.

“I don’t want this sort of thing to happen again at the last minute. It is not only your case that I have to hear, there are other public interest matters that I have to hear. Please, as officers of court, I’m sure you are aware of the court’s practice, ” she said.

She then told the prosecution that she had to postpone the case.

“We can’t proceed in his absence, as this is a criminal matter and our next witness will be a very material witness.

“Although there are legal provisions that allow us to proceed with the case, but for justice and fairness, I allow the dates to be vacated and the court will have to reschedule to other dates, ” she said.

Rozina then postponed the trial to Jan 11 and asked the defence to submit a complete schedule of the dates of the Sabah state assembly sitting to make it easier for the court to reschedule other dates for the trial.

“By Jan 11, please confirm about the dates that I requested because I do not want to get a letter like this stating that he had to attend the sitting. It won’t look good because both are public interest and both are important to the people, ” she said.

On May 3 last year, Bung Moktar, 60, pleaded not guilty to two counts of accepting bribes amounting to RM2.2mil and RM262,500 as an inducement to obtain Felcra’s approval to make a RM150mil investment in Public Mutual unit trusts.

Bung Moktar, who was then the non-executive chairman of Felcra, is accused of accepting bribes from Public Mutual investment agent Madhi Abdul Hamid, 38, through Zizie Ezette at the Public Bank Taman Melawati branch, Jalan Bandar 12, Taman Melawati here between 12.30pm and 5pm on June 12,2015.

He also pleaded not guilty to accepting a bribe of RM335,500 for himself from another Public Mutual investment agent, Norlaili Ahmad Mokhtar, under the name of Zizie Izette for the same reason.

The offence was allegedly committed at the same place on June 19,2015.

Zizie Ezette pleaded not guilty to three counts of abetting her husband in committing the alleged offences. — Bernama