KUALA LUMPUR: It was a nail-biting end which saw Budget 2021 finally passed in the Dewan Rakyat despite a last-ditch effort by the opposition to derail it through a bloc vote.

The RM322.5bil Budget, the largest in the nation’s history, was passed when 111 voted aye while 108 said nay with one absentee.

There was drama at the end of the committee stage when Pokok Sena MP Datuk Mahfuz Omar stood up to call for a bloc vote right after Finance Minister Tengku Datuk Seri Zafrul Tengku Abdul Aziz stood up to move a motion to table the Budget for the third and final reading.Speaker Datuk Azhar Azizan Harun then ordered the House bell to be rung for two minutes. The House then waited for 10 minutes for all MPs to come in before the bell was rung again to indicate the commencement of voting.

But the opposition insisted on calling for a bloc vote again immediately after Zafrul tabled and read out the Budget for final reading.

Azhar noted that since all MPs were already in the House, he would order the bell to be rung again before votes were counted for the second bloc vote.

The results were similar with 111 in favour and 108 against with one absentee.

Cheers from Perikatan Nasional and government backbenchers erupted briefly in the House as Azhar announced the results.

“This vote is proof that the Perikatan Nasional government is concerned about the people, ” Senior Minister Datuk Seri Azmin Ali was heard saying amidst the cheering.

This was the first time that a bloc vote had been called at the third reading of a budget.

It is learnt that the absentee is Gua Musang MP Tengku Razaleigh Hamzah.

Prime Miniser Tan Sri Muhyiddin Yassin in a Facebook post last night thanked all the parliamentarians who voted for Budget 2021, saying this proved that they had heeded the advice of the Yang di-Pertuan Agong, who wanted the Budget to be passed without any disruptions.

The passing of the Budget proved that the Perikatan Nasional government always took into account the welfare and safety of the people as well as the country’s economic recovery in its actions, he added.

Ayer Hitam MP Datuk Seri Dr Wee Ka Siong regarded the passing of Budget 2021 at the third reading as an end to a nail-biting anticipation in Parliament.

“Throughout this process, Ihave witnessed with my own eyes how the Opposition MPs held on to their philosophy of being #ConsistentlyInconsistent.

“We all know that the Opposition has wanted to rule since the former Pakatan Harapan administration fell last Feb 24 following the resignation of Tun Dr Mahathir Mohamad as prime minister.

“The people will also never forget how badly the country was affected by the prolonged political crisis, ” he said in a Facebook post soon after the Budget was passed.

There had been worries about whether Perikatan’s budget would be passed when it was tabled in Parliament on Nov 6.

This was because opposition lawmakers had expressed their right to vote against the Budget and there were rumblings among some Umno lawmakers about it.

A defeat of the Budget at the third reading would be akin to a no-confidence vote against the Perikatan administration.

Adding to the suspense were the 10 unsuccessful bloc votes called by the opposition since Nov 30 during the committee stage of debates for allocations for 27 ministries.

The highest number the opposition achieved through a bloc vote at the committee stage was on Dec 2, with 104 against and 110 for the International Trade and Industry Ministry’s RM1.2bil allocation.

On Monday, Langkawi MP Tun Dr Mahathir Mohamad and Tengku Razaleigh held a joint press conference to urge lawmakers to vote with their conscience if a bloc vote was called at the third reading.

The Budget will now be presented to the Dewan Negara, which convenes for a five-day sitting today for debates.

The Dewan Negara cannot formally reject Bills but can delay their passage by one month or a year if it is not a money Bill. Once passed by the Dewan Negara, the Budget will be sent to the Yang Di-Pertuan Agong for the Royal Assent.

Article 66(4A) of the Federal Constitution states that assent is automatic to any legislation if the Yang di-Pertuan Agong does not provide his assent within 30 days from when the legislation is presented to him.

Once Royal Assent has been given, the legislation has to be gazetted before it comes into force.This may take three to six months. 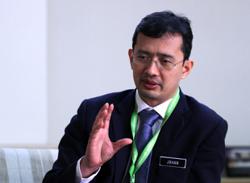