PETALING JAYA: The proposal to allow big corporations to hire foreign workers by financing the repatriation of illegal immigrants has been met with mixed reaction from labour-intensive industries.

Lauding the move, Malaysian Estate Owners Association president Peter Benjamin said the initiative shows the government is finding ways and means to reduce the number of illegal workers in the country.

“However, the government must provide more clarity and details on how it will go about it.

“They have to state the requirements clearly and make them easy to understand because such an arrangement comes with a lot of decisions, ” he said in an interview yesterday.

He pointed out that the government should first allow companies whose foreign workers took leave to visit their home country prior to the movement control order to come back.

“Then only impose the new condition of financing repatriation for each new recruit.

“I believe this can be a win-win solution, ” he said, adding the agriculture industry is facing an acute worker shortage and delayed harvesting that could result in billions of ringgit in losses per year.

Benjamin said that the government should reorganise the placement of foreign workers who have lost their jobs due to the Covid-19 pandemic but are still in the country.

“It will be good if the authorities allow these workers to switch to other industries in need of workers. The government should have the data on these workers, ” he said.

For example, he said allowing the plantation industry to recruit these workers would help the government and also resolve the industry’s problem of a shortage of workers.

“It’s a good solution to reduce the number of illegal immigrants in Malaysia while letting companies hire foreign labour.

“But it is yet to be known if this is a win-win solution because we are still unsure of the full picture, especially the details and cost of the repatriation, ” he said.

If the government cost is higher than the agencies, Khoo said it would only penalise recovering businesses.

“Also, we pay a levy for each hire. The full or partial cost of repatriation can come from there, ” he said.

Federation of Malaysian Manufacturers (FMM) president Tan Sri Soh Thian Lai concurred, adding that employers should not be burdened with the repatriation fee as those who hire via proper channels are already paying towards a bank guarantee of between RM250 and RM1,500 per worker.

It is meant to cover the cost of repatriation should the worker abscond.

“Imposing additional conditions on employers during the current challenging recovery period will be damaging to industries that are already struggling with many other cost challenges as well as labour issues.

“The industry should not be made responsible for covering the deportation cost of illegal foreigner workers, ” he said, adding that it is also costly to hire a new foreign worker now in view of Covid-19 tests and mandatory quarantine.

On the re-employment of illegal foreign workers, Soh said the government should let employers filter and screen the workers before they make a decision without additional cost to the employer except for the cost of work permit, passport and visa.

On Dec 3, among the proposals discussed during the inaugural Home and Human Resources ministers joint committee meeting included big corporations being allowed to bring in foreign workers on a condition that they finance the repatriation of illegal immigrants detained at Immigration depots at a one-to-one ratio.

The hiring of foreign workers in the metal, scrap and used item sub-sector was also recommended to be done away with. 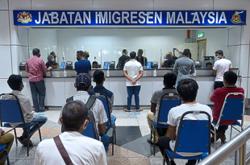