State fallout: Ahmad Faizal, now the caretaker MB of Perak, leaving the Istana Kinta, Ipoh, after meeting Sultan Perak, Sultan Nazrin Shah, to notify him of his defeat in the confidence-vote on Friday.

He made the announcement at a press conference at Laman Seri Ridzuan on Saturday (Dec 5).

He said the resignation letter was submitted to Sultan Perak Sultan Nazrin Muizzuddin Shah during an audience at the Istana Kinta at 3pm on Saturday.

“I presented my resignation letter as Perak MB, as well as that of the entire Exco line-up to his Majesty.

“I am very honoured to have served under the leadership of the Ruler, and behalf of the entire state government administration I would like to apologise for any shortcomings.

“I have done my best, and as an ordinary human being I am not perfect, ” he said with his voice cracking with emotion, and added that he prays that Perak is always blessed.

However at the end of the press conference, Faizal added mysteriously: "We will meet again, maybe at Seri Satria."

Seri Satria is the official residence of the Deputy Prime Minister located in Putrajaya.

Faizal had met the Ruler the second time, the first meeting being on Friday (Dec 4).

This is also the second time Faizal has resigned as the Perak Mentri Besar, with the first one being in March after the change of the state government.

He was then reappointed as the Mentri under the Perikatan Nasional government.

On Friday, Faizal lost a motion of confidence in him as the Mentri Besar at the state assembly. 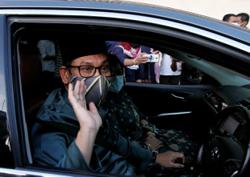