Nurlieda Khaleeda, 20, studying in the tent her father set up for her on top of a hill to get better internet coverage.

TANAH MERAH (Bernama): A father has set up a tent at the top of a 20m hill for his daughter to participate in online learning sessions due to the poor internet and telecommunications coverage in their village.

Nurlieda Khaleeda Mohd Azmi, 20, a second-year medical laboratory technology student from the University of Malaya said before the "classroom" was set up by her father Mohd Azmi Ahmad, 48, she used to go to the town some 3km away just to get a decent internet connection for her studies.

However, due to the enforcement of the conditional MCO in Kelantan for two weeks from Nov 21, her father decided to set up the tent for her, she told reporters at her house in Bukit Petai Tujuh here Sunday (Nov 29).

Azmi also placed some chairs and a table in the tent set up about 30m away from their house to ensure his daughter could study comfortably.

Nurlieda said she used the "classroom" almost every day, but not at night, as she was worried for her safety and the risk of being exposed to venomous animals such as snakes.

She also brought along her laptop and wireless modem and would spend about two to three hours a day in the tent to undergo learning sessions or sit for examinations.

"What worries me most is that I’m currently sitting for examinations from Nov 23 until Dec 3. I have to switch on my mobile phone camera to allow the lecturers to monitor me.

"I am quite stressed with the intermittent internet connection in the village which makes it difficult for me to sit for my examinations. In fact, the two hours provided were insufficient due to the unstable connection. If the internet disconnects, I have to start over and no additional time is given, ” said the eldest of five siblings.

Meanwhile, Azmi said he would accompany his daughter at the tent until she finished her classes or examinations.

"Especially now, as it is raining every day. The tent is uncomfortable, but we have no choice for the sake of her future. This is not a problem only we are facing, but also other students in higher education institutions and schools, ” he said.

Azmi said that the internet and telecommunications coverage problem was nothing new, and those in five nearby villages also faced a similar predicament.

"In fact, some younger people have even built tree houses to get better coverage, ” he said. - Bernama Nurlieda Khaleeda making her way up the hill to the makeshift 'classroom' set up by her father. 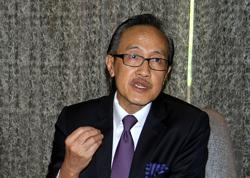