PUTRAJAYA: The Malaysian Anti-Corruption Commission (MACC) has launched an investigation over claims that recording artistes, comprising singers and music performers, have been denied millions of ringgit in unpaid royalties.

Officers from the anti-graft body raided four offices belonging to companies involved in the probe and left with several important documents.

“Several documents have been taken by the MACC for study and research.

“Certain individuals will also be called up to assist in the investigations, ” said the source.

MACC deputy chief commissioner Datuk Seri Ahmad Khusairi Yahaya confirmed that an investigation on the matter has been launched. He however said it was too early to issue a comment on the probe.

“To be fair, everyone involved should refrain from sensationalising this issue. Please give ample time for the MACC to investigate this matter in a transparent and professional manner, ” he said.

The investigation has been opened under Section 18 of the MACC Act 2009, which covers false claims.

The allegation was first raised by the Malaysian Artistes Association (Karyawan) in early October, which claimed that millions of ringgit collected as royalties over the past two decades have not been distributed to singers and musicians. 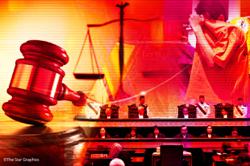