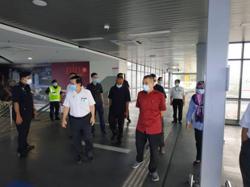 Penang Gerakan vice-chairman H’ng Khong Leng on Friday (Nov 27) said it was announced in the state assembly sitting on Oct 12 that the state government had allocated RM413,940 for the museum’s rental fee for 2020.

"If this is true, then the state has given about RM2mil to the museum to pay for its rental fee since the museum’s establishment in March 2016.

"We find it suspicious that a private entity could receive that much funding while other tourism organisations in Penang do not receive as much financial aid, ” he told a press conference here Friday.

H’ng also claimed that the museum was not registered under the Companies Commission of Malaysia (CCM), as it could not be found in the CCM database.

He added that he believed the museum had received that much financial support from the state as the museum curator Hew Kuan Yau (also known as ‘Superman Hew’) was a strong Democratic Action Party (DAP) supporter.

"We urge Chief Minister Chow Kon Yeow to clarify this with proper documentation to clear any suspicion from the public, ” he said. – Bernama