KUALA LUMPUR: Budget 2021 completed its first major hurdle when it was passed in the Dewan Rakyat at the policy stage amid earlier uncertainties over whether Perikatan Nasional could garner support for it.

There was a brief tense moment while Azhar was announcing that the Budget was passed by a majority voice vote when Pokok Sena MP Datuk Mahfuz Omar demanded for a division vote in the House.

“Do you (Mahfuz) have 15 MPs to call for a division vote?

“Sergeant-at-arms, please count if there is sufficient numbers, ” Azhar said.

Several Perikatan Nasional and Barisan Nasional lawmakers were heard taunting Mahfuz and several opposition lawmakers who stood up for a division vote which involves a physical vote count of lawmakers present in the House. Making a stand: Several Opposition MPs standing up in support of Mahfuz’s call for a division vote on Budget 2021 at the end of policy stage debates in the Dewan Rakyat.

None of DAP’s 42 lawmakers and almost all of PKR’s 38 MPs did not stand to support Mahfuz’s call for a division vote.

Azhar then informed the House that only 13 MPs stood in support of Mahfuz’s call for a division vote and proceeded to announce that the Budget was passed by a majority voice vote amid cheers from the government backbenchers.

He announced that the Budget was passed at the policy stage and would now go on to be debated at the committee stage where it would be voted on again at the end of debates before being finally passed.

Earlier during his winding up speech, Tengku Zafrul called on lawmakers to put aside their differences and support the Budget which he described as a “Budget for survival and resilience”.

“The true owners of the Budget are the millions of our rakyat who have been waiting patiently for the budget to reach them, ” he said.

Meanwhile when contacted, Hassan, who was sole PKR lawmaker seen standing up, acknowledged that he did not toe the party line as he was merely following his conscience as a lawmaker.

Asked if there was an order by the PKR top leadership to support the Budget, Hassan declined to reveal further but said he was prepared to face PKR disciplinary committee for not toeing the party line.

Under Parliament Standing Order 46(3), a Bill will be put in the House for a voice vote of “ayes” and “nays” at the debates with the results announced by the Speaker.

The results can, however, be challenged by an MP under Parliament’s Standing Order 46(4) by calling for a division vote which involves physical vote count of lawmakers present in the House.

For a division vote to be triggered in the House, not less than 15 lawmakers must be seen standing in support, failing which the Speaker would announce results of the earlier voice vote.

‘Implement measures fast to help those who need it’ 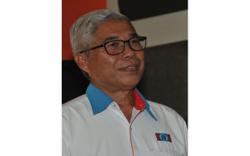 Scammers impersonating friends or family to cheat people in PJ, say police
Terengganu MB thanks Selangor govt for RM500k contribution for flood recovery efforts
Vell Paari: MIC has no problems with PAS, has issues with ‘arrogant behaviour" of Kedah MB
Five charged with trafficking over RM340mil of drugs in Johor
Those feeling ill after coming from Covid-19 high-risk areas should be tested, says Sarawak health director
Mad rush for police permits ahead of strict enforcement in Sibu
Cops probe missing jewellery claim at Seremban hospital
Anwar files judicial review application to challenge govt decision over Emergency proclamation
Thaipusam: Devotees not allowed to accompany chariot throughout its journey to Batu Caves and back, says ministry
Lee Lam Thye: Enforcement of SOP must be done with integrity