KUALA LUMPUR: A man is believed to have been murdered at the Taman Intan Baiduri People's Housing Project (PPR).

Sentul OCPD Asst Comm Beh Eng Lai said the 21-year-old victim had initially gone to the PPR with a friend to set up tents at about 8am on Wednesday (Nov 25).

"Initial investigations revealed that the man then went to Block E of the housing project to buy food.

"Two men on a motorcycle arrived at the scene. One of them disembarked and slashed the victim," he said when met at the scene on Wednesday.

The victim managed to make his way to Block B where he collapsed, he added.

"His body was discovered by a passer-by," he said.

ACP Beh said a 25-year-old man, who is also a resident of the PPR, has since been detained.

"We have not established a motive for the attack. The weapon used has not be recovered," he added.

ACP Beh said the body has been sent to Kuala Lumpur Hospital for post-mortem.

"Those with information should come forward as soon as possible," he said. 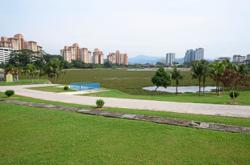